All eyes were on jobless claims this morning, which were expected to rise by 3.7mm, though estimates were wide-ranging from 800,000 to 6.5mm. So, where did they come in?  How about 6.648 million.  That was above all economists forecasts!

Equity markets were pricing a gain of more than 1% but have given up half of those gains in the immediate aftermath of the report.

Read today’s Bespoke Morning Lineup for a discussion of the latest trends and statistics of the outbreak, overnight moves in the market, and some really weak employment-related data out of Spain.

Last week’s jobless claims reading reflected the fact that 1% of the US population filed for unemployment.  With claims doubling this week, that means 2% of the US population filed for claims this week  Not the labor force but the entire population. Given the moves in claims over the last two weeks, the historical chart of claims is essentially useless. That surge in claims we saw during the financial crisis? It looks like nothing more than a speed bump in relation to what we’re going through now. 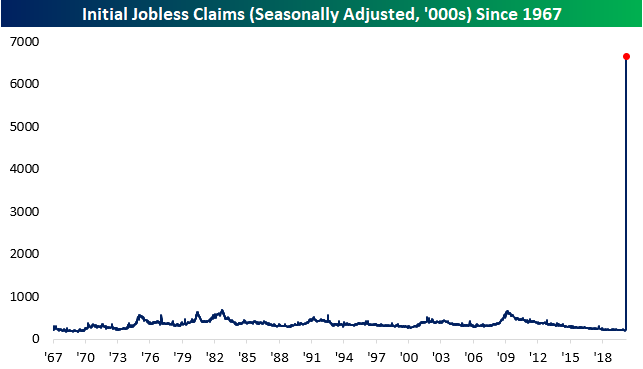