“It all comes down to interest rates. As an investor, all you’re doing is putting up a lump-sum payment for a future cash flow.” – Ray Dalio

The anti-gravitational pull higher in equities has continued this morning as some modest weakness in futures overnight has reversed with all of the major averages now looking to open in the green.  Housing data has the spotlight this morning, and both Housing Starts and Building Permits topped consensus expectations.  The latter saw only a small beat relative to expectations, while the former exceeded forecasts by more than 100K (1739K vs 1611K). The only other indicator on the calendar between now and the weekend is Michigan Confidence.

We’re already hard at work on this week’s Bespoke Report, but this morning we wanted to provide a quick update to a chart from last week’s report.  The annotated chart below shows the yield on the 10-year US Treasury on an intraday basis over the last 15 trading days.  Along with the move in yields, we’ve also annotated the chart with the releases of some key economic indicators over that time period.  So, let’s recap them for you.

On 3/30, Consumer Confidence saw its biggest beat relative to expectations since at least 2000 and the third largest m/m gain on record.  On 3/31, the Chicago PMI was the strongest since July 2018.  The next day (4/1), the ISM Manufacturing report came in at the highest level in decades.  The equity market was closed for Good Friday on 4/2, but Non-Farm Payrolls came in more than a quarter of a million above forecasts.  The following Monday on 4/5, the ISM Services report, which goes back to the mid-1990s, came in at the highest level on record.  After 4/5, there was a bit of a lull in the data, but last Friday (4/9), PPI saw its largest y/y increase since 2011 while this week’s CPI saw the largest m/m increase since 2009.  Finally, in yesterday’s data dump, Jobless Claims dropped to their lowest level of the pandemic, Retail Sales came in at nearly twice consensus expectations with the second-largest m/m increase on record, and both the Philly and NY Fed Manufacturing indices surged.

With all of this great data following a period where the market was freaking out over interest rates, you could have expected to see a big jump in rates, but instead, we’ve seen the complete opposite with the yield on the 10-year at its lowest level since February.  As Peter Lynch once said, “Nobody can predict interest rates”, or for that matter, “the future direction of the economy or the stock market.” 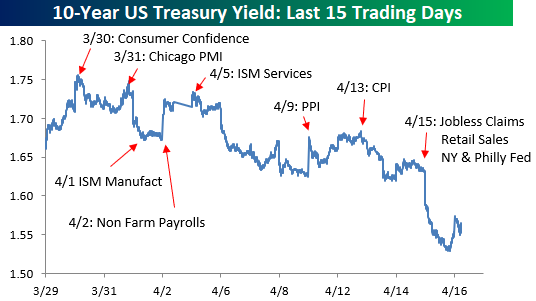