A few million here and a few million there, and pretty soon those millions start to add up.  This morning, weekly jobless claims came in at 5.245 million which was below consensus forecasts for 5.5 million but still the third-highest reading on record.  In other news, Housing Starts and Building Permits were mixed relative to expectations as Starts missed forecasts (1.216 million vs 1.3 million)  while Permits topped expectations (1.353 million vs 1.296 million).  The April Philly Fed report was expected to show a headline reading of -32 but was much weaker at -56.6.  While the data was bad on an absolute basis, it could have been much worse, and as a result, futures are rallying from where they were before the report.

Read today’s Bespoke Morning Lineup for a discussion of overnight market events in Asia and Europe, some notable earnings results from Asia, Europe, and the US, the latest COVID-19 trends, and other stock-specific news of note. 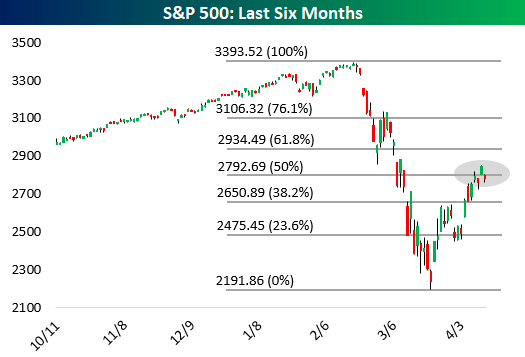