“You only get out of it what you put into it. If you are a sheep in this world, you’re not going to get much out of it.” – Greg Norman

As bad as you think you think you have it right now with the weakness in the stock and bond market this year, just consider yourself lucky you weren’t in Greg Norman’s shoes 26 years ago today at Augusta.  Actually, at this point in the day, as the birds chirped, the morning dew on the fairways glistened in the sun, and the scent of azaleas filled the air, Norman probably had a pretty big smile sitting on a six-stroke lead over Nick Faldo heading into the final round of the Masters.  When the round started, though, the path got a lot rougher.  Norman started with a bogey on the first but got back on track with a birdie on two.  Then, after a par on the third, Norman bogeyed the par-three fourth and then bogeyed again on the par-four eighth.

One over for the front nine wasn’t bad, but coming out on the back nine, Norman put up bogey, bogey, and double-bogey on 10, 11, and 12 and finished the round with a six over 78.  What looked like a Sunday formality for Norman turned into one of the biggest collapses in Masters history as Nick Faldo countered with an epic 67 and was fitted for the green jacket in the clubhouse.  26 years later, Norman’s round is still considered the worst collapse in Masters history; almost like the golf equivalent of the 1987 crash (or at least Marlboro Friday). As a columnist for the Tampa Tribune described it, “For Greg Norman’s lifetime, for yours, for mine, for eternity, wherever golf is played and remembered, in pro shops, pawnshops, locker rooms, card rooms, bars, churches, in Augusta, Ankara, and Alaska, the 1996 Masters will be recalled simply as the one Greg Norman blew.”  See, things aren’t so bad.

Even with that collapse, most of us would change places with Greg Norman in a second.  Winston Churchill once said, “Success consists of going from failure to failure without loss of enthusiasm.”  And while Norman never went on to win another major and only managed to win a handful of other tournaments, he went on to enjoy an extremely successful professional career in clothing, golf course design, wines, real estate, and a number of other endeavors. In other words, he adapted to and capitalized on the environment he found himself in.  Similarly, the stock market is always evolving.  While a certain approach works in one environment, as circumstances change, investors need to adapt and capitalize on the opportunities that present themselves.

Economic data this morning was mixed with Initial Jobless Claims coming in slightly ahead of forecasts while Continuing Claims were weaker.  Headline Retail Sales were just shy of forecasts while the reading ex-autos and gas came in at 1.1% compared to forecasts of an increase of 0.9%.  The reaction from futures has been muted as a lot of traders may already be starting their holiday weekend early.

Sometimes we look at an indicator and just say, “Whoa”.  That was out reaction this morning when we saw the latest sentiment survey from the American Association of Individual Investors (AAII).  After dropping to an already depressed level of 24.7% last week, this week’s reading plummeted to 15.8%.  To find a lower reading you have to go back even further than Greg Norman’s collapse at the Masters.  The last time there were fewer bullish investors in the AAII survey was in September 1992 when Boyz II Men topped the charts with “End of the Road”. While the period from 1992 through 1994 wasn’t the best time period for the stock market, it certainly wasn’t the end of the road either. 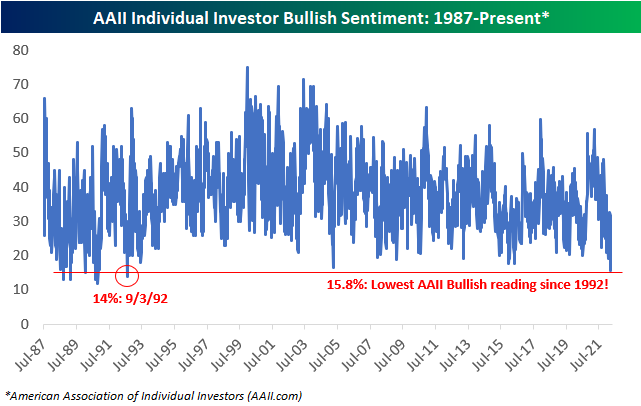