After the best week since 1974 and the second 10%+ rally for the S&P 500 in three weeks, US equities are understandably starting off the week on a down note.  That being said, futures are off their lows.  This is going to be a big week for the market as earnings season kicks off.  With the economy shut down indefinitely, though, for a lot of companies, there aren’t going to be much in the way of earnings, revenues, or guidance to speak of.

Read today’s Bespoke Morning Lineup for a discussion of the oil production cut agreement over the weekend, the latest trends and statistics of the COVID-19 outbreak, and other stock-specific news of note.

The performance of semiconductors in recent days has been a bit concerning.  We reference the group a lot, but that’s only because they have been such a reliable leading indicator for the broader market.  While the Philadelphia Semiconductor Index (SOX) led the S&P 500 off its March lows, in the last few days it has been lagging.

On Thursday, as the S&P 500 rallied 1.5%, the SOX fell over 2% for its worst single-day underperformance versus the S&P 500 since March 16th.  Even more disheartening than the bad day, though, was how it transpired.  In early trading, the SOX was actually up with the market and even briefly traded above both its 50 and 200-day moving averages.  Shortly after the open, though, the sellers stepped in and within the first hour of trading, it was down on the day.  Had the early gains held, it would have been the first time since 2/21 that the SOX closed above both its 50 and 200-day moving averages, but instead of that milestone, the index saw its relative strength make a new short-term low.  Watch the group today to see if last week’s weakness was temporary or not. 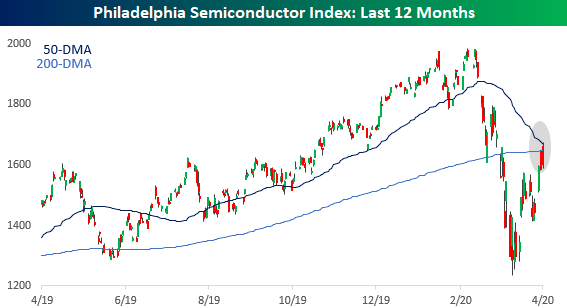