“Your reality is as you perceive it to be. So, it is true, that by altering this perception we can alter our reality.”  – William Constantine

Equities are experiencing a monster rally this morning with S&P 500 futures up over 1.5% and the Nasdaq indicated to open higher by more than 2%.  European stocks have rallied even more with Germany’s DAX up nearly 5%!  As we have pointed out several times over the last several weeks, though, futures are only telling us where the market is now, and where we finish the day can easily look a lot different than it does now.  Take the current level of futures, for example.  At the open today, the S&P 500 will still be trading below yesterday’s afternoon high.  We’ll take what we can get, though.

There’s seemingly not much in the way of a catalyst that can be cited for this morning’s move, but comments from a Russian spokesperson saying that Russia isn’t looking to overthrow the Ukrainian government have been cited by some as contributing to the move. These types of comments have been common over the last two weeks, though, and they differ from what has actually been taking place on the ground in Ukraine.

The only economic report on the calendar this morning is the JOLTS report, but it’s a January report, so it won’t be telling us anything we don’t already know.

Lastly, today marks the 13-year anniversary of the Financial Crisis low in March 2009, ending what was one of the worst bear markets in US history, and if you remember that day, there wasn’t a lot of hope for investors as it looked like there was no way out for the market. The thing to remember regarding bear markets and market corrections, though, is that at the lows, the way out is never obvious.

Energy stocks have had a rally this year that can only be described as insane.  Over the last 50 trading days, the Energy sector ETF (XLE) is up over 40% while the S&P 500  ETF (SPY) is down more than 11%.  That works out to a spread of nearly 53 percentage points!  Since XLE started trading in 1999, there has never been a 50-trading day period where the XLE outperformed SPY by as wide or wider of a margin. 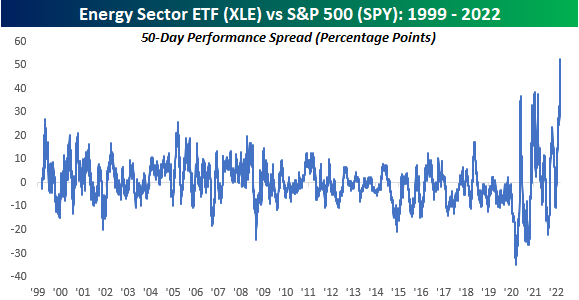 Looking at the above chart, it’s hard not to argue that the Energy sector has massively gotten ahead of itself.  50 percentage points of outperformance in 50 days?  Changing perspective a bit, though, shows just how depressed the Energy sector was relative to the rest of the market.  The chart below shows the long-term relative strength of XLE versus SPY since the start of 1999.  What a ride it’s been!

Basically from the time XLE started trading to mid-2008, it handily outperformed SPY, but in the 12 years that followed, XLE gave up all of its outperformance and more, only just recently getting back to even. Since the start of 1999, both ETFs have essentially experienced the same returns (+232% for XLE and +238% for SPY).  So even after the recent surge in XLE, it is still slightly underperforming SPY over the last 23 years, and if you measure performance since the lows of the Financial crisis, SPY’s performance is more than five times the return of XLE! 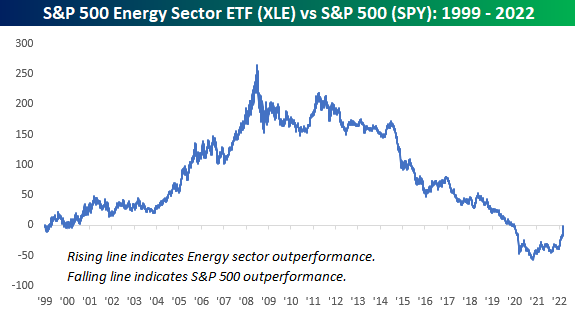