Futures were higher earlier but have been losing ground relatively quickly as a number of negative headlines have crossed the tape.  First, Spain reported its highest number of casualties since the crisis began.  Closer to home, it has been a harrowing day in the New York City area as the city saw its number of fatalities increase 16% in the span of just six hours!  That’s right, as of 10:30 AM on Monday, the death toll in NYC stood at 790, but by 4:30 PM the total number of fatalities has increased for 914.

On the economic front, Goldman Sachs has revised its forecast for Q2 GDP down to 34%!  We have long stated that the market would bottom when it could look through headlines that were only going to get worse, and headlines like the ones we have seen this morning and will likely see in the coming days/weeks will provide a test the resolve of the market’s recent rally.

Read today’s Bespoke Morning Lineup for a discussion of the latest trends and statistics of the outbreak, overnight moves in the market, and a great state by state summary of the latest Covid-19 trends in the United States. 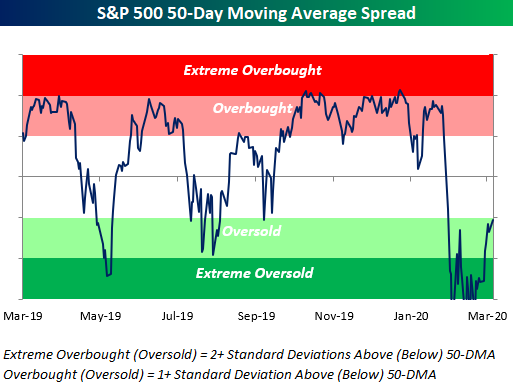