In today’s edition of never put a lot of trust in headlines coming out of the Russia-Ukraine war, after yesterday’s optimistic tone regarding a potential ceasefire, reduction of Russian troops, and even the possibility of a meeting between Putin and Zelenskyy, this morning much of that optimism has been walked back as the withdrawal of Russian troops appears to have been a mirage, and Zelenskyy is claiming that Russia is sending in new forces.

Across most asset classes, we’re seeing a reversal of yesterday’s moves with US equity futures down across the board and oil trading higher.  In Germany, they’re even starting to talk about the possibility of rationing natural gas.

In economic data today, the ADP Private Payrolls report was pretty much right in line with forecasts while the second revision to GDP rose 6.9% which was slightly weaker than expected.

Following yesterday’s rally and the big bounce we have seen since the recent lows, we wanted to provide a quick look at all of the major index ETFs based on market cap.  Moving from smallest to largest, both the Russell Micro-Cap Index (IWC) and the Russell 2000 (IWM) have broken their downtrends that have been in place since late 2021 after making a number of higher lows.  In the mid-cap space, the S&P 400 (MDY) has also made a number of higher lows and taken out its early February high, but yesterday’s rally stopped out just shy of the intermediate-term downtrend.

Moving on to the large-cap side of the spectrum (bottom two charts), both the Nasdaq 100 (QQQ) and S&P 500 (SPY) look very similar to each other (probably because they are dominated by the same companies), and yesterday’s advance in both indices took out the highs from the short-term ‘double top’ in early February.

While technicals often have a way of looking good until they don’t, we’d be remiss not to note that the technical picture for the market looks rather impressive especially when you consider the fact that inflation is rampant, the FOMC is hiking rates, and there’s a war in Europe.  Paraphrasing Admiral Farragut’s comments from the Battle of Mobile Bay back in August of 1964 during the Civil War, damn the torpedoes. Full speed ahead. 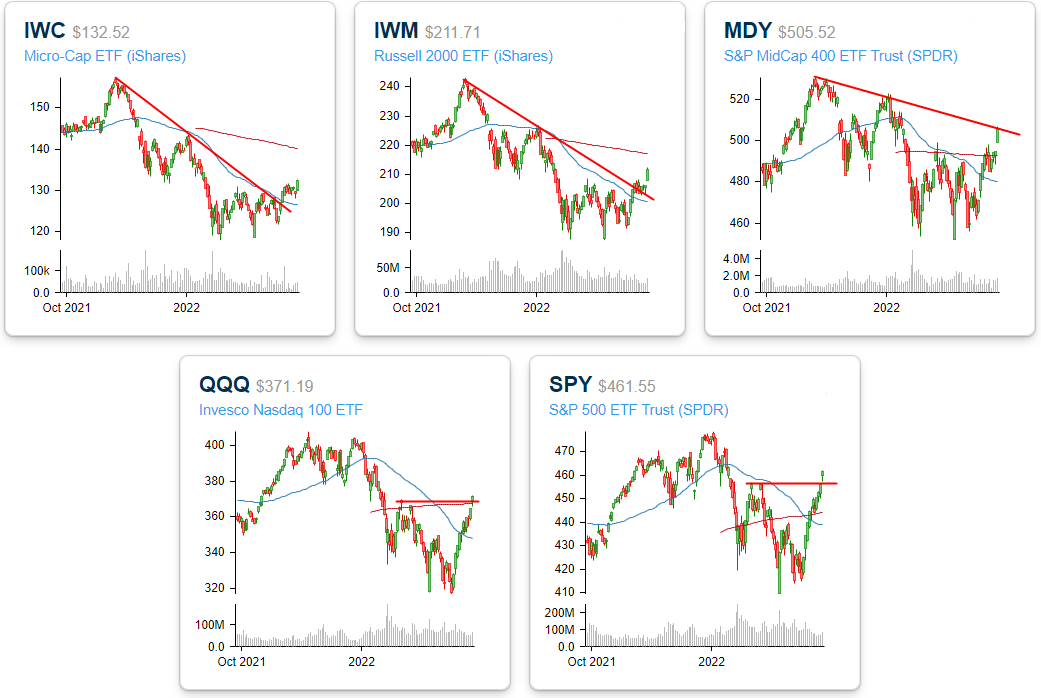