“Your information sources should complement one another, and also be redundant because that gives you a way to verify what you’ve learned.” – Andrew S Grove

It almost took an entire quarter but the S&P 500 is on the cusp of its first back-to-back weekly gains in all of 2022.  For the Nasdaq, a positive finish to this week would be the first back-to-back weekly gain since November.  Futures are currently indicated higher, and the only economic reports on the calendar are Pending Home Sales and Michigan Confidence.  Pending Home Sales are expected to bounce back modestly following January’s surprise decline of 5.7%.  Michigan Confidence, meanwhile, has been one of the most disappointing economic series of the last several months as it’s well below its COVID lows and at levels last seen in late 2011 and before that the Financial Crisis.

Markets in Europe are modestly positive with the major benchmark indices up between 0.5% to 1.0%. despite weaker than expected sentiment readings in Germany and Italy, while UK Retail Sales unexpectedly declined.  Treasury yields in the US are higher again today with the 10-year up to 2.36% while the 5-year is even higher at 2.40%. Crude oil is down another 2% sending WTI down to $110 per barrel, gold is modestly lower, and bitcoin is trading above $44,500.

Yesterday was a good day for the equity market, but it was especially strong for semiconductors as the Philadelphia Semiconductor Index (SOX) rallied close to 5%, and every stock in the index was up at least 2%!.  In the process of Thursday’s rally, the SOX finished the day above its 50 and 200-day moving average for the first time since January and also managed to close back above its highs from last Summer (red line). 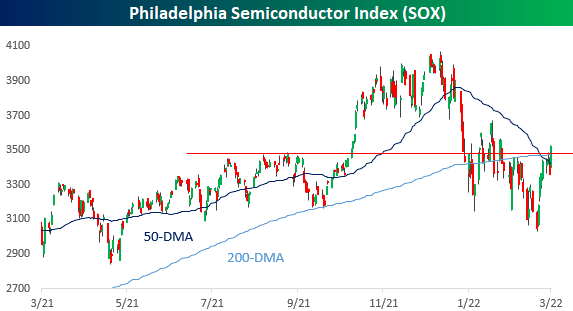 We watch the relative strength of the SOX versus the S&P 500 as it has historically been a good leading indicator of the broader market. On the positive side, yesterday’s rally broke the most recent downtrend that has been in place since mid-January, but it came up just short of taking out the high end of last summer’s range. 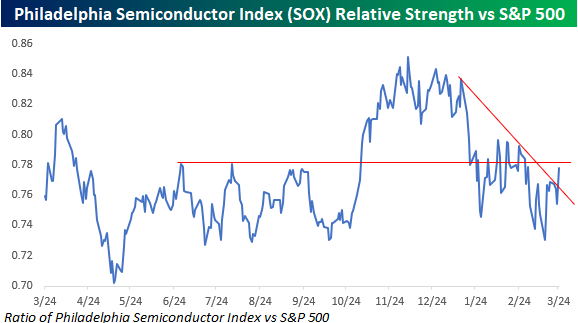 One thing the SOX has been this year is volatile.  Over the last 50 trading days, the index has seen an average daily move of more than 2.5%.  That ranks as the highest average daily change since the COVID crash (when it went much higher), and before that, you’d have to go all the way back to the financial crisis to find the last time daily volatility in the SOX was as high as it is now. In the post-dot-com era, this kind of volatility for semiconductors has been extremely uncommon. 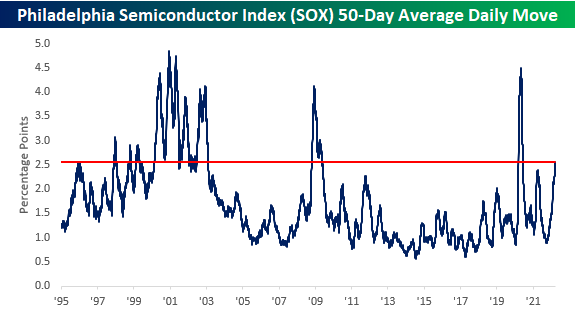