Treasuries have continued to sell-off this morning following yesterday’s trouncing in the wake of Powell’s comments regarding the potential for a 50 bps rate hike at upcoming FOMC meetings.  Equities, on the other hand, have seemingly ignored the higher rates and traded higher.  In the commodity space, crude oil and gold are both essentially flat.

In the Russia-Ukraine war, talks for a potential ceasefire have seemingly stalled as the Russians argue that Ukraine is dragging its heels, while Ukraine asserts that it will not cede any land to Russia.  Zelensky has now even asked the pope to step in and mediate. As the talks stall, Russia hasn’t let up with its military strikes even after reports suggest that its ground game has been faltering.

The last week of trading has really seen some extraordinarily strong finishes for the market.  The chart below shows the S&P 500’s performance in the last hour of trading so far in 2022.  For much of January and through February, the majority of days saw the equity market sell-off into the close.  In fact, at one point in late January, the performance of the S&P 500 in the final hour of trading was the weakest since October 1987.  Over the last five trading days, though, in the middle of a war in Europe where you would think concerns of overnight headline risk would be at their highest, we have seen five straight days where the S&P 500 has gained at least 0.33% in the last hour of trading.  It may not be uncommon to see one or two days of similar gains in the last hour of trading, but to see five straight is extremely rare.  In fact, to find the last time this happened, you have to go all the way back to July 2002!  Talk about finishing off on a high note! 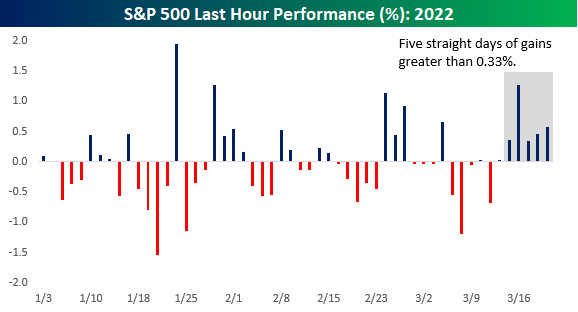