“The road to success and the road to failure are almost exactly the same.” – Colin R. Davis

It’s been a while since we’ve had a “vaccine Monday” but today’s supplier of positive headlines is AstraZeneca (AZN).  The company announced earlier that its vaccine was 79% effective against symptomatic COVID-19 and 100% effective against severe disease.  More importantly, AZN also reported no safety concerns such as the blood clotting issues that had been reported in the EU last week.  Unlike prior vaccine Mondays where equity futures have typically surged in reaction to the news led by the DJIA and S&P 500 while the Nasdaq lagged, this morning’s picture is the complete opposite.  DJIA futures are actually lower heading into the opening bell, the S&P 500 is flat, Nasdaq futures are up half of one percent, and the 10-year yield is actually lower.  With AZN likely to now enter the fray, it’s only a matter of weeks before vaccine shortages in the US turn to gluts.

Be sure to check out today’s Morning Lineup for updates on the latest market news and events from the US and around the world, including a discussion of the chaos in Turkey after its Central Bank chief was fired for raising rates last week, data on Korean Exports, Eurozone Current Account, the latest US and international COVID trends including our series of charts tracking vaccinations, and much more.

Also, if you weren’t able to catch it earlier this morning, make sure to check out our interview on CNBC’s Squawk Box.

Tomorrow marks the one-year anniversary of the S&P 500’s COVID low and what an impressive run it has been.  The chart below shows the performance of each of the S&P 500’s components since the close on 3/23/20.  Of the 500 names shown, the average gain through Friday’s close has been just over 100%!  Even more amazing is the fact that only three stocks in the entire index are down during this span.  The worst of the three has been Gilead (GILD).  With a decline of just over 10%, the maker of Remdesivir, which originally rallied on the promising prospects of its potential COVID treatment, has been a dog ever since.

On the other end of the spectrum, the top-performing stock has been ViacomCBS (VIAC).  Since the close on 3/23. VIAC has rallied nearly 800%.  Behind VIAC, four other stocks are up 500% (TSLA, LB, ETSY, and FCX).  Notably absent from the list of top performers is the Technology sector.  Of the top 50 performing stocks in the S&P 500 since 3/23, only one stock from the Technology sector (Enphase- ENPH) made the cut. 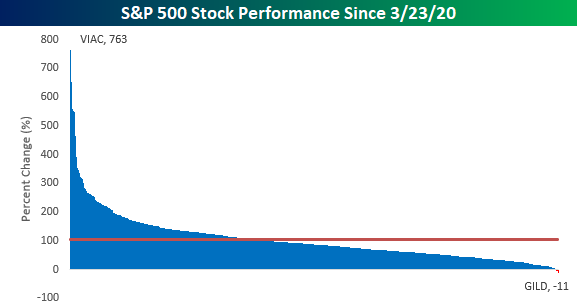