“Economics is a very difficult subject. I’ve compared it to trying to learn how to repair a car when the engine is running.” – Ben Bernanke

Early weakness in the futures yesterday gave way to the luck of the Irish as the major averages all closed sharply higher bringing the string of 1%+ gains for the S&P 500 up to three.  Futures are a bit weaker this morning than they were at this time yesterday, so it may prove more difficult to turn the tide again today.  This morning’s call between Biden and Xi at 9 AM could be an important catalyst regarding how the war in Ukraine plays out.  China has been more favorable to the Russian side and has ramped up criticism of the US in recent days, with some officials in Washington worried that the country will start providing direct assistance to Russia.

The economic calendar is relatively quiet today with Existing Home Sales and Leading Indicators (both at 10 AM) the only reports on the calendar.  St. Louis President James Bullard has already been out this morning saying he advocates a 3% Fed Funds rate by year-end and a more rapid reduction in the balance sheet.

Over a shorter time window, prices have also been volatile.  For just the sixth different period since the early 1980s, WTI crude oil has seen its average daily move exceed 4% over the last 50 trading days.  As shown in the chart below, the last 50 trading days join 1986, 1990, 2008, 2016, and 2020 as one of the most volatile two-month periods for the commodity on record. 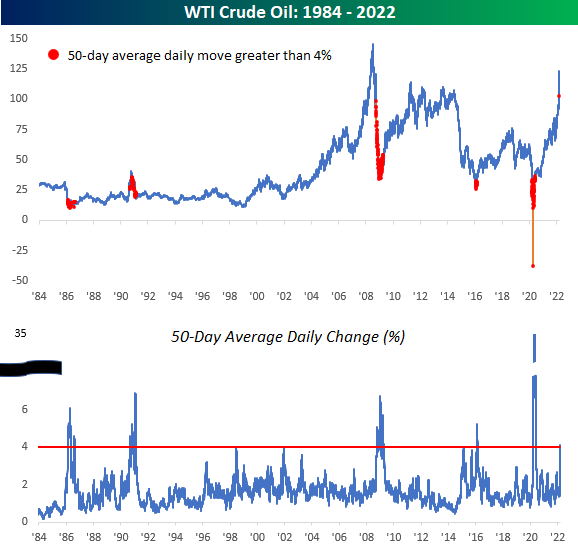