“In times of rapid change, experience could be your worst enemy.” – J. Paul Getty

Equity prices are recovering off early lows as commodity prices, especially oil, plummet.  The cause of the decline could be attributed to either concern over weaker demand as the latest COVID wave washes ashore in China, or optimism over the war in Ukraine and the potential for a ceasefire.  Those are two very different catalysts and would both have very different implications for the market and global economy as well.

In economic data, February PPI was just released and it came in weaker than expected at both the headline and core levels.  Core PPI came in at just 0.2% which was tied for the lowest reading since the end of 2020.  While inflation data was weaker than expected, Empire Manufacturing was a disappointment falling 11.8 versus expectations for a level of 6.8. That March reading for Empire Manufacturing was the weakest since May 2020.

What a month it has been for crude oil.  After finishing off February at a level of $95.72, WTI rallied nearly 30% on a closing basis and over 35% on an intraday basis in the span of just over a week.  After hitting that multi-year high just a week ago, crude oil has practically round-tripped its entire early March gain, falling more than 22%.  If these levels hold through the end of the day, it would rank as the largest decline from a 52-week high in the span of a week or less for WTI on record!  Now, if prices at the pump would only reverse that quickly. 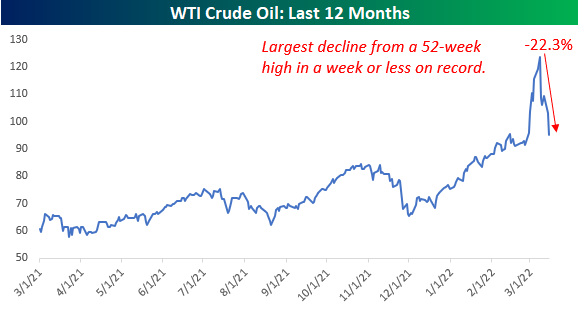