“The best way to destroy the capitalist system is to debauch the currency.” – Vladimir Lenin

It was fun while it lasted.  After a much-welcomed rally Wednesday, futures are firmly in the red this morning and set to give up a little more than a third of their gains from yesterday, and as we’ve been typing this the losses have only been mounting.  For the S&P 500, that would put this week’s losses at over 2% for the week. Meetings between foreign ministers from Russia and Ukraine did not yield any substantive results, so the fighting looks set to continue.  Elsewhere in Europe this morning, the ECB left rates unchanged (as expected), but announced a faster timeline for its plan to wind down asset purchases.

The big economic event of the day is obviously CPI, and it’s not going to be pretty as the headline reading is expected to increase 0.8% relative to January, while the core reading is forecasted to increase 0.5%.  Don’t forget about jobless claims, though.  The weekly reading on initial claims is expected to come in at a level of 225K.  One combination of data that the markets will not want to see is higher than expected readings on both fronts.

There’s no arguing that the current levels of inflation are high and likely to go even higher in the months ahead.  Since the start of 2021, there has only been one month (August 2021) where headline CPI has come in weaker than expected, and the compounded impact of these higher than expected monthly readings is the fact that today’s report for the month of February will mark the 9th straight month that y/y headline CPI has been above 5%.  That’s a pretty long streak, but looking back over history, it’s nowhere close to as long as some of the prior streaks we have seen.  Late in WWII and into 1920, headline CPI was above 5% for nearly five years.  In the early 1940s during WWII through 1951, there were three separate streaks where headline CPI was above 5% y/y for at least a year.  Then there was the 1970s coming out of the Vietnam War and into the early 1980s when there were three streaks that lasted at least 20 months including a five and a half year streak ending in 1982.

To put it another way, in the entire decade of the 1970s, more than 75% of all CPI readings were above 5% and the average y/y reading was 7.1%. Inflation is painful right now and will likely get worse from here, but the current period is still nowhere near the 1970s. 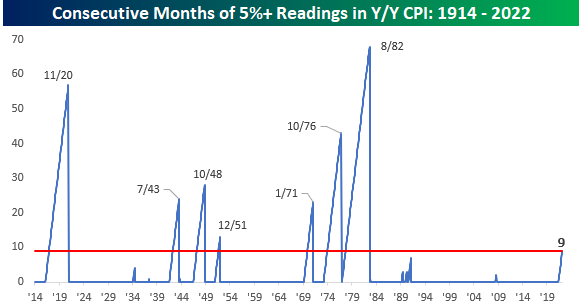