“The first panacea for a mismanaged nation is inflation of the currency; the second is war. Both bring a temporary prosperity; both bring a permanent ruin. But both are the refuge of political and economic opportunists.” – Ernest Hemingway

Nothing like a quote on the perils of inflation for a day when inflation is on everyone’s mind in the wake of recent market performance and today’s release of the February CPI.  Equity futures were modestly higher heading into the release, treasury yields are higher, and bitcoin is above $55K.  With the report coming in right in line with expectations at the headline level and slightly weaker than expected ex-food and energy, the positive tone looks to be continuing.  We would stress, though, that this is only the initial reaction. There’s lots of time left in the day and even to the opening bell!

Be sure to check out today’s Morning Lineup for updates on the latest market news and events, including a recap of Asian and European markets, French manufacturing output, credit growth and inflation in China, an update on the latest national and international COVID trends, including our series of charts tracking vaccinations, and much more.

After Tuesday’s surge in the Nasdaq and strong rally in the S&P 500, US equities are back in the black for the week, but in many ways, the stocks that led the rally on Tuesday were the exact opposite of the ones that outperformed on Monday.  For starters, within the entire Russell 1000, there were only 36 stocks that outperformed the index by more than 1% on both days.

The decile performance of stocks in the Russell 1000 on Tuesday based on their performance Monday also illustrates this trend.  As shown in the chart below, the five deciles of top performers Monday all averaged declines on Tuesday, while the five deciles comprising the worst-performing stocks from Monday all saw positive returns on Tuesday.  Outside of decile one which was only down slightly less than decile two, the performance rankings of the ten deciles on Monday versus Tuesday was a complete reversal. As noted in the Bible, “the last shall be first, and the first last:” 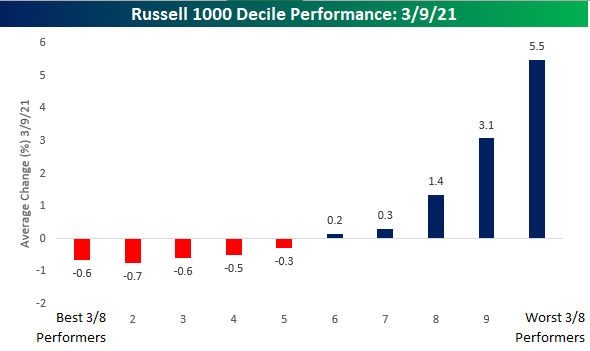