“The desire to perform all the time is usually a barrier to performing over time.” – Robert Olstein

After six straight days of gains, US equity futures are poised to open lower this morning.  If the S&P 500 finishes the day lower, it will be the first down day since 1/29 when the S&P 500 closed below its 50-day moving average.  The data calendar is on the light side this morning.  NFIB Small Business sentiment was released earlier this morning and came in lower than expected (95.0 vs 97.0) falling to its lowest level since May.  Later on, we’ll get the release of the JOLTS report for December.

Be sure to check out today’s Morning Lineup for updates on the latest market news and events, earnings reports from around the world, recent moves in the dollar, a preliminary analysis of Japanese Machine Tool Orders, an update on the latest national and international COVID trends, and much more. 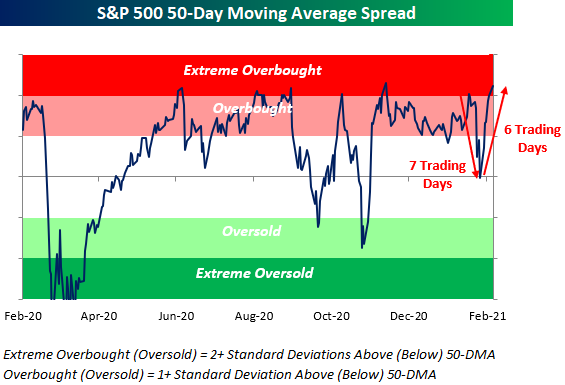