A strong earnings report from Amazon.com (AMZN) last night was overshadowed by the news that founder and CEO Jeff Bezos would be stepping down to take on the role of executive chairman beginning on July 1st.  While the news made headlines, Bezos isn’t going anywhere; he’s only going to be less active in the day-to-day operations of the company which reports suggest he already has been for some time.

While Jeff Bezos is symbolically moving on from running the company he founded, we’ve also passed the peak of earnings season as all of the mega-caps have now reported quarterly numbers.  There are still a lot of individual companies scheduled to report, but the companies representing much of the market cap for the S&P 500 have already reported. Investors will now have to find another issue to focus on, and that will likely be the progression of economic and COVID data which are both intertwined. One economic data point out this morning was the ADP Private Payrolls report which topped expectations by more than 100K (174K vs 70K).

The price of bitcoin has been consolidating in recent weeks after its surge to end 2020, but prices of ethereum have been climbing to new highs.  The chart below shows the ratio of ethereum to bitcoin over the last twelve months, and ethereum’s strength has caused the ratio to breakout above its highs from the end of last summer. 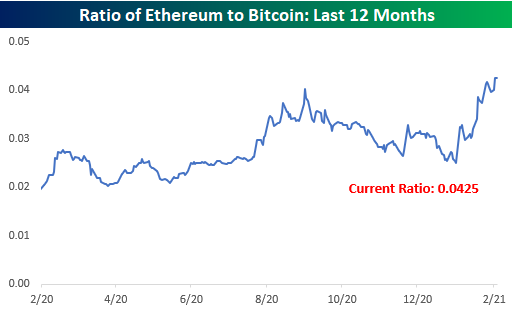 From a longer-term perspective, ethereum’s rally has also taken the ratio above its highs from early 2019 as well, but still well off its record highs from early 2018. While ethereum still trades for less than one-twentieth of the price of bitcoin back in early 2018 it was as much as one-tenth of the price.  In other words, even after the recent rally, ethereum’s price relative to bitcoin is close to historical lows than highs. 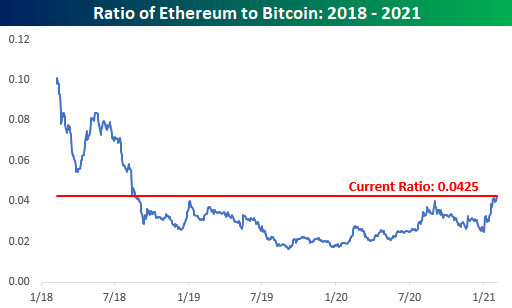