“Don’t blindly follow someone, follow market and try to hear what it is telling you.” – Jaymin Shah

After trading lower most of the night, futures have seen a significant turnaround leading up to the opening bell.  Although not nearly as dramatic as Thursday’s intraday reversal, major US indices are currently looking at steady gains.  Whether that holds into the closing bell ahead of the weekend remains to be seen.  The catalyst behind this morning’s strength has been calls for diplomacy from China in settling the Ukraine conflict and apparent signals from Russia that they too are ready to have diplomatic talks.  At the same time, though, the Russian military says it has seized control of a key airport outside of Kyiv.

Yesterday, we noted that the Nasdaq 100 ETF’s (QQQ) positive reversal was just the third time in its history that the ETF gapped down more than 3% at the open and finished the day more than 3% higher.  The other two days were in April 2000 and May 2001.  Neither of those two prior days were followed by positive returns for US stocks.  Widening out the criteria a little more, yesterday was only the 14th time that QQQ gapped down 2% at the open and finished the day higher.  Once again, the vast majority of prior instances occurred during the dot-com bust, but they weren’t exclusively confined to that period, and there have also been a handful of prior occurrences since the end of the financial crisis that occurred late in market selll-offs as well.  In other words, the jury is still out, and given the catalyst behind yesterday’s downside gap (a major geopolitical conflict) it’s probably not a good idea not to read too much into one day’s action. 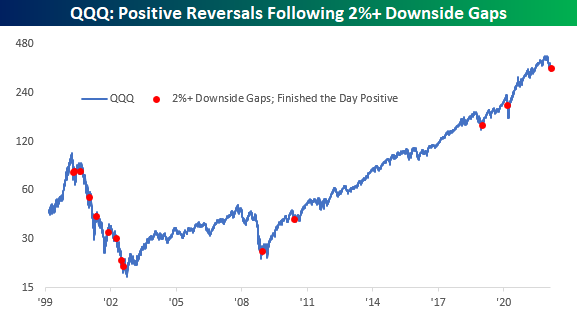