“It is an old device in Wall Street—to change the colour of the certificates in order to make them more valuable.” – Edwin Lefèvre

Everyone knows that stock splits are completely meaningless when it comes to a company’s fundamentals, but yet companies continue to split their stocks anyway, and more often than not, the price of a stock gets at least a short-term boost from the announcement.  The latest example was last night when Alphabet (GOOGL) said they would split the stock on a 20-1 basis.  So rather than trading for around $3,000 per share, GOOGL will trade for around $150 per share post-split.

Again, the split means nothing in terms of GOOGL’s fundamentals, but it does make the stock more palatable for investors looking to add a position.  In a world where most brokerage firms now offer fractional shares, a company’s share price should be even less of a factor, but from the psychological perspective of an individual investor, it feels better to own a few shares of a company’s stock rather than a fraction of one share of a company’s stock.  GOOGL’s split wasn’t the only news for the stock last night.  The company also reported a very large earnings beat, and while the stock split is no doubt a contributing factor behind today’s move, the earnings results are the primary driver of today’s move.

GOOGL’s earnings results are helping to push futures in the green this morning as the Nasdaq is indicated to open up by more than 1%.  S&P 500 futures are also firmly higher, while the Dow, where GOOGL is not represented (at least for now) is only looking at fractional gains.  Besides GOOGL. strong results from AMD are also contributing to the positive tone in tech, but that strength has been offset from weak results from PayPal (PYPL) and Starbucks (SBUX).

In economic news, the only report of the day is ADP Private Payrolls, and it was a big dud.  While economists were forecasting an increase of nearly 200K jobs in January, the actual reading was a decline of 301K as the Omicron wave that spread across the country caused major – although likely temporary- disruptions to the economy.

US stocks have seen some big moves over the last five trading days as the Nasdaq 100 (QQQ) has rallied close to 6%. Behind QQQ, the S&P 100 (OEF) is also up over 5%. At the other end of the spectrum, the three weakest indices are all connected to small caps.  In other words, the latest bounce has been driven completely by mega-caps.  Even after the market has started to dig itself out of the January hole, every major index ETF remains below its 50-day moving average (DMA) and nearly half are still oversold, including the Nasdaq 100. 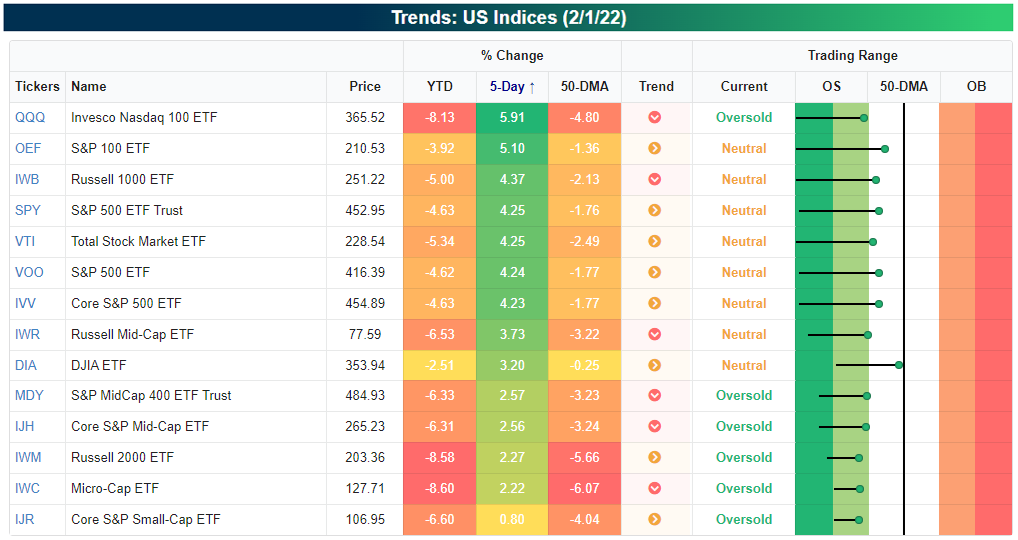 Turning back to GOOGL, the stock is currently indicated to open up by a little over 10% this morning which would be the 9th time in its history that the stock gapped up over 10% in reaction to earnings with the last occurrence all the way back in October 2015.  In the prior eight periods where GOOGL gapped up over 10% in reaction to earnings, the stock continued higher during the trading day five out of eight times for a median gain of 0.19%.