“Big market price changes happen when lots of people are forced to reevaluate their prejudices, not necessarily when the world actually changes – Colm O’Shea

Futures are little changed this morning, but that could change over the next 90 minutes as there’s a big slug of economic data on the calendar.  Its starts with PPI and Retail Sales, which were just released.  Both of these reports were gargantuan.  Headline PPI came in at 1.3%, which was more than three times consensus expectations and the largest m/m increase in over ten years.  Retail Sales were also much stronger than expectations.  While economists were expecting the headline reading to rebound to 1.1% after three weaker than expected readings, the actual reading came in at 5.3%.  Consumers were clearly ready to spend to start the year. When it comes to economic data, that’s not all either.  At 9:15 eastern, we’ll get the latest updates on Industrial Production and Capacity Utilization, followed by Homebuilder sentiment at 10 AM.

Be sure to check out today’s Morning Lineup for updates on the latest market news and events, earnings reports from around the world, economic data out Asia and Europe, an update on the latest national and international COVID trends, and much more.

It may have just seemed like a late summer day at the time, but September 2, 2020 was a notable day for the market as it represented the beginning of the longest period of consolidation for the current bull market so far.  After a solid and steady rally off the March lows, the S&P 500 traded in a sideways pattern for the next several weeks and didn’t make a new high for more than two months.  While the market ultimately resumed its winning ways, as we all know now, the character of the rally changed considerably.  The chart below shows the performance of S&P 500 stocks from the close on 2/19/20 through 9/2/20.  The x-axis of the chart is sorted by market cap with the largest stocks as of 2/19/20 all the way to the left, and as you move to the right, market caps get progressively smaller.

Since 9/2, though, performance has changed considerably.  While the ‘average’ stock is up 20.2% during this period, the same five stocks that led the market from 2/19 through 9/2 are barely higher, averaging a gain of 3.1% and ranking an average of 353 out of 500 in terms of performance.

At the time, September 2nd didn’t seem like an especially remarkable day in the market, but it represented a long-term shift in the performance of mega-caps relative to the rest of the market. 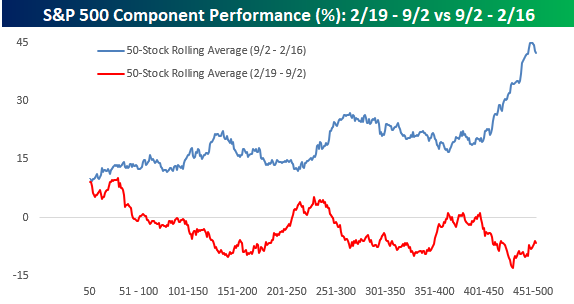