“What we know is a drop, what we don’t know is an ocean.” – Isaac Newton

Investors have breathed a sigh of relief this morning on headlines that some Russian troops on the border of Ukraine are starting to return to their bases.  Setting aside the fact that it wouldn’t make a lot of sense to take comments from a would-be invader seriously, investors will take any positive news while they can get it.  The bottom line is that like the quote above, there is much more we don’t know about the situation at hand than what we do know, and that doesn’t even include the FOMC and the state of the US economy. On the latter, the economic calendar starts to pick up today and for the rest of the week.  Today’s reports include PPI and Empire Manufacturing which will both be released at 8:30. For our first take on the data, make sure to listen to our Twitter Spaces where we will break it all down.

A potential easing of Russia-Ukraine tensions has caused WTI crude oil prices to fall over 3% from yesterday’s close to the lowest levels since – hold on for it – last Friday.  With energy prices lower, you would expect Energy stocks to show weakness today, and that’s exactly what we’re seeing in the pre-market with the Energy Select Sector ETF (XLE) trading down nearly 2%.  While the positive correlation between crude oil prices and energy stocks is holding up so far today, we would note that in yesterday’s trading the two traded inverse with each other as WTI traded up over 2% while energy stocks traded down more than 2%.  That was the first time in over a year that energy stocks were so weak on a day that crude oil was up over 2%. 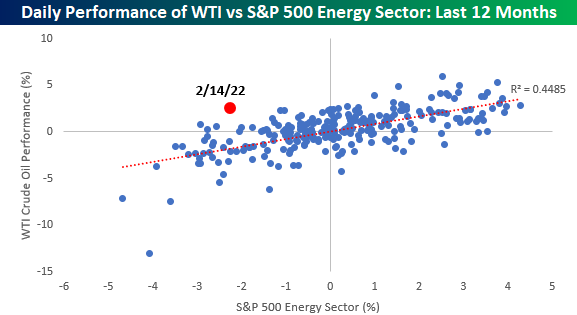 Despite yesterday’s inverse trading, crude oil and energy stocks have been joined at the hip for the last year.  Through the close yesterday, WTI was up 59% over the last year while the Energy sector was up 53%.  While those performance numbers are already similar to each other, before Monday’s divergence, less than one percentage point separated their performance over the trailing twelve months.  If tensions over Ukraine do in fact ease over the coming days, look for energy prices and therefore energy stocks, to take a breather from their torrid performance this year. 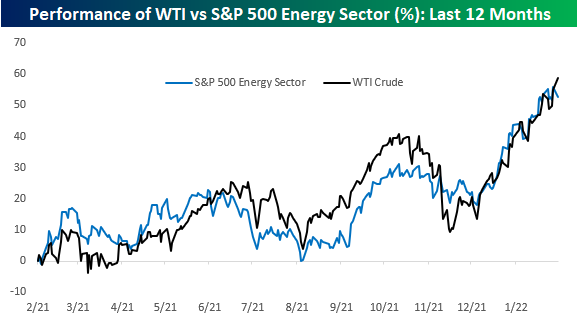