“I’m just one person on the committee.” – James Bullard

It was looking like a rough start to the week as European equities traded down well over 2% and US futures were lower by more than 1%, but comments from Russian Foreign Minister Sergei Lavrov that appeared to open the door to diplomacy have caused some relief and a rebound in futures.  Now, attention has shifted to St. Louis President James Bullard who is being interviewed on CNBC for further insight into his views on inflation.

After two weak days heading into the weekend, all of the major averages closed out last week back below their 200-day moving averages (DMA).  As recently as Wednesday, the DJIA (DIA) was above its 50-DMA, but Thursday’s CPI and subsequent comments from Bullard and then the Russia tensions on Friday pushed the index back below both of those levels.  For the Russell 2000 (IWM), neither the 50 nor 200-DMA ever even came into play last week.  The Nasdaq 100 (QQQ) managed to barely close above its 200-DMA on Wednesday but closed out the week near its lows as sellers took control.   Last but not least, the S&P 500 (SPY) looked to make a run for its 50-DMA on Wednesday but couldn’t quite get there before the tide turned into the end of the week.  In down trending markets, moving averages shift from acting as support to resistance, and based on the last several days of trading, moving averages for the major indices have increasingly acted as a ceiling on prices rather than a floor. 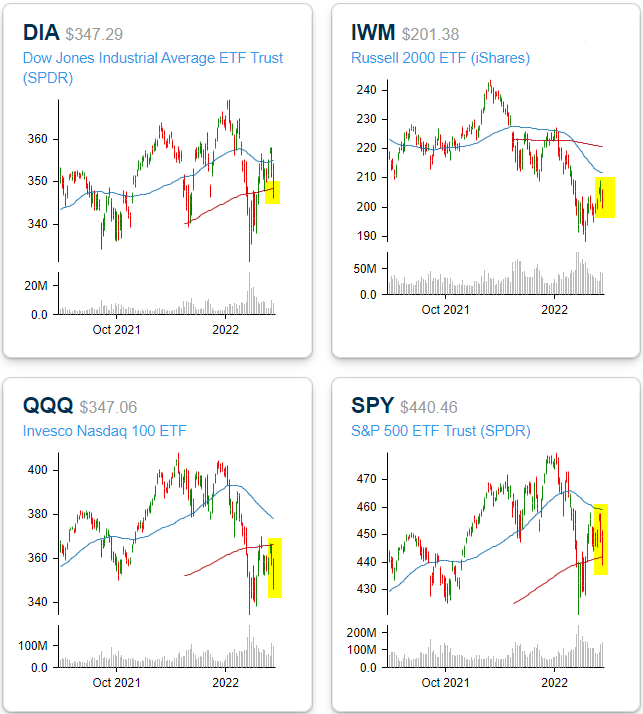