“Things there are no solution to: Inflation, bureaucracy & dandruff.” – Malcolm Forbes

It’s finally here, the CPI report the world has been waiting for.  Today’s CPI report for January is very likely one of the most-anticipated economic indicators of the year so far and leading up to it, futures were mixed with the Dow higher while the S&P 500 and Nasdaq marginally lower.  That’s certainly a tentative tone given the strong earnings we have seen from the likes of Disney (DIS), Coca-Cola (KO), Uber (UBER), Mattel (MAT), and Twilio (TWLO), which are all up sharply in reaction to their reports.  Treasury yields were likewise little changed heading into the report with the 2-year and 10-year maturities trading pretty much unchanged relative to yesterday’s close (1.34% and 1.93%, respectively).

CPI came in higher than forecasts with the headline reading surging 0.6% compared to forecasts for an increase of 0.4%.  Core CPI also rose by the same amount versus forecasts for an increase of 0.5%.  On a y/y basis, headline CPI was up 7.5% which was the highest reading since 1982.  Core CPI was up 6.0% which was also stronger than expected and the highest since 1982.  The initial market reaction has been – you guessed it – lower with equity futures selling off and treasury yields moving higher as the 10-year approaches 2.0% and the 2-year trades at 1.45%.

Inflation has easily been the number one concern of investors for the last year now, but in looking at market performance on the day of prior reports since the start of 2021, you wouldn’t necessarily think the markets were preoccupied with inflation.  Since the start of 2021, there has only been one CPI report that has come in weaker than expected (August report released on 9/14/21).  Of the remaining 12 reports, eight have been higher than forecasts, and four have been right in line with estimates.

Given all those higher than expected reports, you would think that the average S&P 500 performance on CPI days since the start of 2021 would be negative and Treasury yields would move higher, but that hasn’t really been the case.  As shown in the table below, the S&P 500’s average performance on the day of CPI reports since the start of 2021 has been a gain of 0.25% (median: -0.04%) with gains 61.5% of the time.  Moves in the Treasury market have been even more counter-intuitive.  On the 13 prior report days since the start of 2021, the yield on the 10-year US Treasury has dropped an average of nearly 2 basis points (median: -0.6 bps) with increases in yield less than a third of the time. 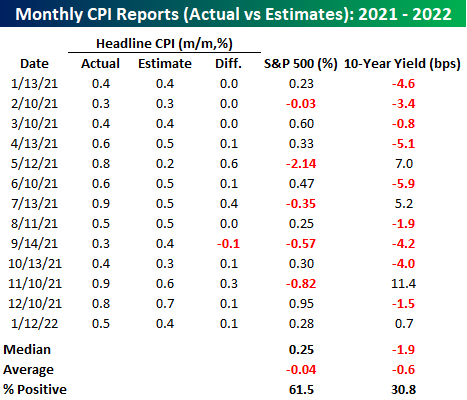