Futures have been drifting higher all morning as positive momentum continues.  Interest rates are modestly higher (although those increases have been erased following the release of CPI), and bitcoin is down nearly 3%.  All in all, it’s been a pretty quiet morning so far.  In economic data, CPI for January was just released and despite some concerns that the report would come in hot, the headline print was right in line with forecasts (0.3%) while the core reading was unchanged versus expectations for an increase of 0.2%.  On a y/y basis, CPI is up just 1.4% versus expectations for an increase of 1.5%. As much as the Fed wants it, inflation just won’t seem to budge.

Be sure to check out today’s Morning Lineup for updates on the latest market news and events, earnings reports from around the world, an update on the latest national and international COVID trends, and much more.

Although the S&P 500 and Dow ended Tuesday modestly in the red, small caps continued to shine as the Russell 2000 extended its winning streak to seven days.  In the history of the Russell 2000 dating back to 1979, there have been seven prior winning streaks of seven or more trading days, so they are not particularly uncommon.  Based on those prior streaks, the Russell’s performance on day eight has been an average gain of 0.15% (median: +0.18%) with positive returns 71% of the time.  So, more often than not seven-day streaks make it to eight.

In more recent history, seven-day streaks have been a little less common.  Since the start of 2019, there have only been two other streaks of seven or more trading days and they were both in 2019 (February and June). 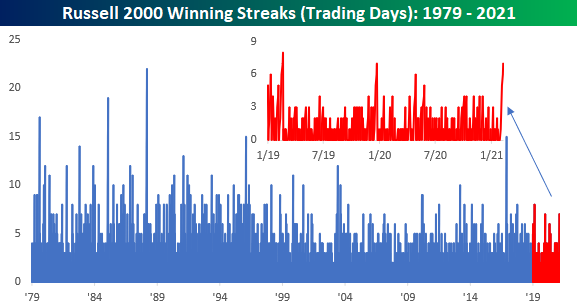