“To be successful in life, you must get in the habit of turning negatives into positives.” – George Foreman

The last two trading days of the month helped to soften the blow, but a lot of people are probably happy to turn the page on January and start a new month.  Futures are mixed to kick off the month with the S&P 500 and Dow futures modestly lower while the Nasdaq is slightly higher.  Major economic reports today will include the ISM Manufacturing report, Construction Spending, and JOLTS which will all be released at 10 AM. In the case of all three reports, this morning’s prints are expected to show some deceleration relative to last month’s readings.

We’ve already seen a decent number of earnings reports this morning with UPS trading up sharply after reporting an earnings triple play, but this afternoon will be even busier with Alphabet (GOOGL) headlining.  Other notables will include General Motors (GM), Starbucks (SBUX), PayPal (PYPL), and AMD.

The Nasdaq was looking at a loss of more than 10% heading into the final trading day of January, but Monday’s 3%+ rally moderated the decline to a still steep 8.98%.  With a rally of more than 6% in the month’s last two trading days, January was only the sixth month in the Nasdaq’s history where the index rallied more than 5% in the final two trading days of the month.  Before January, the last occurrence was more than twenty years ago in May 2000.  As shown in the table and chart below, back around the peak of the dot-com bubble there were actually three different occurrences in the span of less than a year, and before that, you had to go back to October 1987.  The only other occurrence was in March 1980. 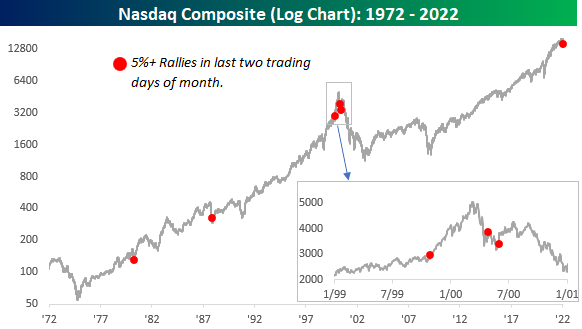