“Happiness is just how you feel when you don’t feel miserable.” – John Lennon

Futures have been steadily improving as we head into the opening bell as the S&P 500 looks to end a streak of five straight declines.  European equities have been basically flat trading in a range, while treasury yields and crude oil are higher.  One notable asset class that hasn’t been moving at all is bitcoin.  In the span of the last 24 hours, the world’s largest cryptocurrency has traded in a range of less than 1%.  Looking ahead, the only economic reports on the calendar today are initial and continuing jobless claims.  After that, all eyes will shift to Friday’s PPI…and then CPI and the Fed next week.

Happiness is not a feeling the bulls have after the first week of December.  The Nasdaq just completed its worst first week to December since 1975.  Think about that.  Chances are you had no idea what the stock market even was the last time the Nasdaq started off December this bad.  Weakness hasn’t just been isolated to the Nasdaq and growth stocks either.  While some sectors have done worse than others, they’re all down over the last week as Powell’s speech last week at the Brookings Institution fades into the rearview mirror.

Leading the way lower, Energy has plunged over 6.5% as weaker oil and natural gas prices finally catch up to the sector.  There’s no need to feel bad for Energy, though, as it’s still up over 58% YTD and is more than 57% percentage points ahead of the next closest sector (Utilities).  Other sectors that have been under pressure since December started were Consumer Discretionary, Financials, Technology, and Communication Services.  At the other end of the performance spectrum, Health Care and Utilities get the participation trophies as they’re both down less than 1% MTD.

As bad as December has been to start, one potential bright spot is that every sector except for Energy and Consumer Discretionary remains above its 50-day moving average, so if you want to take the optimistic approach, the last week can still be considered a digestion of the rally off the October lows.

One last side note.  This year has been unique for a lot of reasons, but how often is it that you see Energy and Consumer Discretionary simultaneously leading the market to the downside? 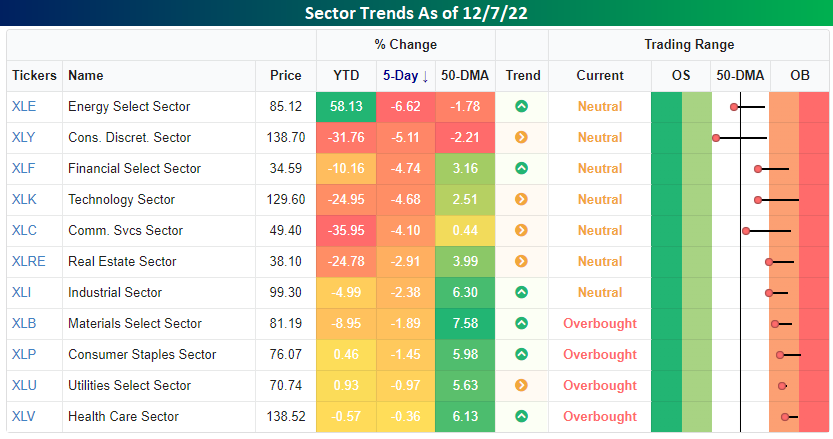