“Theory is splendid but until put into practice, it is valueless.” – James Cash Penney

December just keeps getting lousier and lousier as futures are negative, putting the S&P 500 on pace for five straight losses to kick off what has historically been one of the more positive months of the year.  The culprit for this morning’s weakness is negative trade data out of China, and the action in oil over the last couple of days has been signaling that weakness.  The just released reports on Nonfarm Productivity and Unit Labor Costs came in better than expected providing a boost to futures but at this point, not enough to push them into positive territory.

It hasn’t been a healthy start to the month of December for the market, but the Health Care sector has held up better than a lot of others with its decline of less than 1.3%.  The sector has had a strong run from its October lows, and technicians are salivating over the impending ‘golden cross’ for the sector.  A golden cross occurs when a security’s short-term moving average crosses above a longer-term one as both are rising, and it’s considered a positive technical pattern.  In the case of the Health Care sector, we’re looking at the 50 and 200-day moving averages and barring any major moves, that crossover will occur tomorrow. 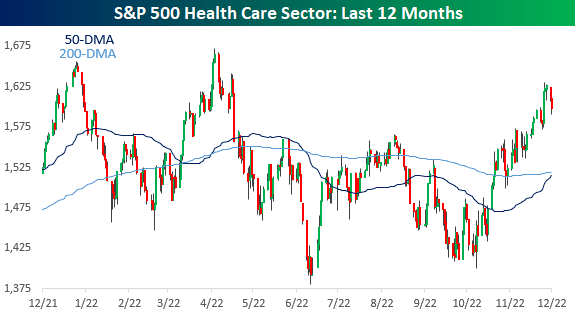 With a lot of technical patterns, the theoretical doesn’t always translate to reality.  The table below lists the thirteen prior golden crosses for the Health Care sector since the start of 1990, and for each one, we list the sector’s performance following that occurrence.  As shown at the bottom of the table, while median returns over the following week and month were better than the average for all periods since 1990, median returns three and six months later were actually below the long-term average for all periods.  One year later, the Health Care sector was positive 12 out of 13 times for a median gain of 9.2%, and while the consistency of positive returns was better than average, the median return of 9.2% was basically right in line with the historical average.  Historically speaking, golden crosses for the Health Care sector haven’t been bad, but they haven’t necessarily been followed by better-than-average returns either. 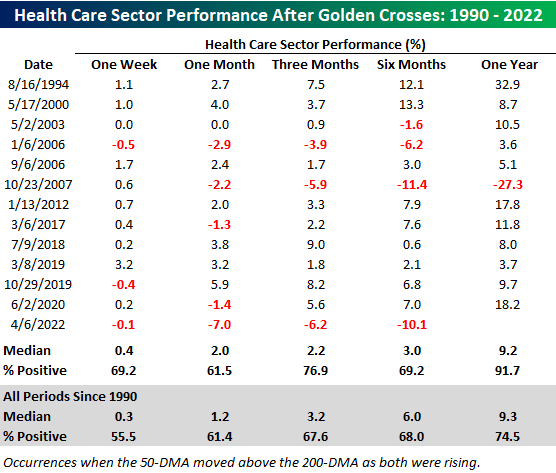