“Once, during Prohibition, I was forced to live for days on nothing but food and water.” – W. C. Fields

It’s been a weak start to the trading week this morning as major averages in Europe and futures in the US are lower.  While China rallied overnight, economic data in the EU didn’t do anything to encourage investors as PMI data for the services sector was generally weaker than expected, remaining in contractionary territory.  Retail Sales in the region also declined slightly more than expected, falling 1.8% versus forecasts for a decline of 1.7%.  Here in the US, the S&P 500 is on pace to open about 0.5% lower, treasury yields are modestly higher and crude oil is higher after OPEC+ announced plans to keep production levels intact. The only area of the market showing any strength this morning is crypto where bitcoin and Ethereum are both up nearly 1%. Overall, there’s no real catalyst for the weaker tone besides the fact that Morgan Stanley’s Mike Wilson said the rally has little upside left in the tank.

The equity market finds itself at an interesting juncture right now with almost as many conflicts as a high school lunchroom.  Despite declines on five of the last six trading days, thanks to a 3%+ rally last Wednesday, the S&P 500 managed to finish the week up just over 1%.  Similarly, while the S&P 500 also closed above its 200-day moving average (DMA) for the first time since the spring, the downtrend from the all-time high at the start of the year remains firmly in place.  For every positive, it seems, there’s a negative.

In the European equity market, it’s a similar setup.  The STOXX 600 was three weeks ahead of the S&P 500 in getting above its 200-DMA, and it also managed to break its downtrend on that same day.  While those are positive technical developments, the current 16%+ rally is at least temporarily running out of gas right at the same levels that rallies in May and August both stalled out.  If all of this confusion is enough to make you want to drink, look on the bright side; at least you can now do that legally now as Prohibition ended 89 years ago today. 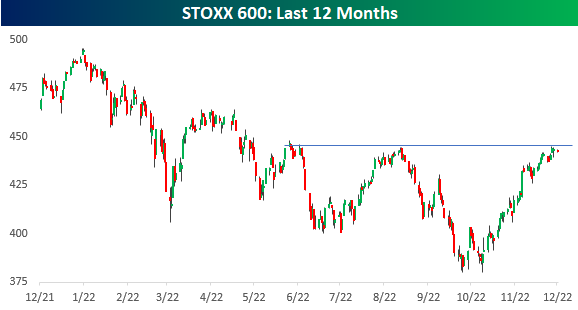