“Hope smiles from the threshold of the year to come, whispering ‘it will be happier’…” – Alfred Lord Tennyson

In case you missed it last Friday, we emailed out our annual Bespoke Report which covers everything you need to know about the setup for financial markets and the economy heading into 2023.  You can read it here.

At least we hope next year will be happier!  That’s not the case this morning, though, as markets are giving the pulls one last dagger to close out the year.  Nasdaq futures are currently down over 1% while the S&P 500 is indicated to open down roughly half of one percent.  Besides the fact that the calendar still says 2022, there’s little in the way of catalysts driving the weakness. US Treasury yields are modestly higher on the day while crude oil trades lower.  The only economic report on the calendar today is the Chicago PMI which is expected to rebound following last month’s surprise plunge.  That index could use a lift as it’s currently in the midst of its largest y/y decline since 1980!  From a market perspective, can today’s closing bell come soon enough?

For all the volatility we’ve seen this month, it was surprising to see that the nine 1% days in the S&P 500 (up or down) this month only ranks tied for 10th going back to 1952 when the five-day trading week in its current form started on the NYSE.  In fact, even last year just as the S&P 500 was about to peak, the month of December had more 1% daily moves.  The other years with more 1% days in December all stand out in market history as some of the most volatile years in market history, including 2008 when there were 15 (more than two-thirds of all trading days in the month) 1% daily moves. 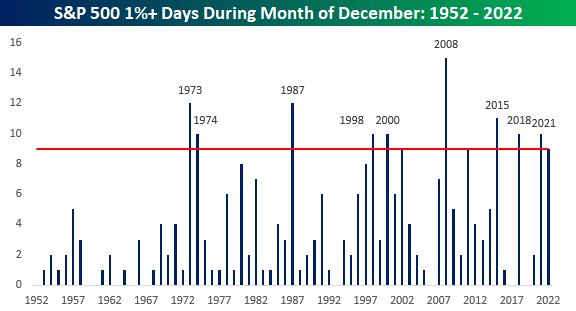 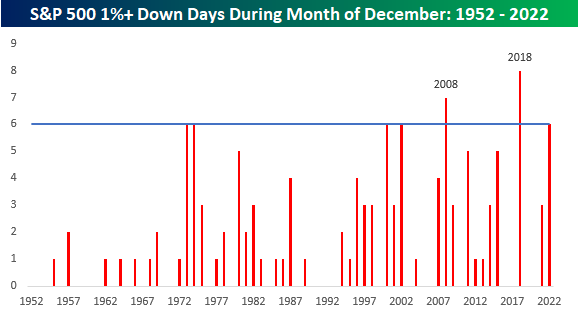