“There is no greater sorrow than to recall in misery the time when we were happy.” – Dante Alighieri

In case you missed it last Friday, we emailed out our annual Bespoke Report which covers everything you need to know about the setup for financial markets and the economy heading into 2023.  You can read it here.

There are just thirteen hours left of trading to go and then we can finally bid farewell to 2022.  Futures are positive this morning, but if this year has taught us anything, it is that what happens in the futures market doesn’t often follow through to regular trading. The only economic data on the calendar this morning is jobless claims at 8:30 eastern.  Initial claims were right in line with forecasts at 225K while continuing claims increased to 1.71 million, which is the highest reading since February.

Individual investor bullish sentiment increased more than five percentage points but still remains depressed at less than 26%.  This week’s results also officially confirm that 2022 will be the first year in the history of the survey (since 1987) that bullish sentiment was below its historical average every week of the year. 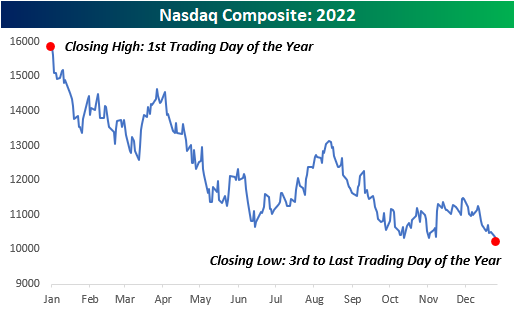 Shifting focus to the YTD low, on average, it occurs on the 90th trading day of the year.  Even more notable, though, is the fact that there have only been four other years where the Nasdaq’s YTD low occurred in the final two weeks of the year (2022, 2018, 2000, and 1973).  Those are also the only four years in the Nasdaq’s history where it made its YTD closing low in December.  In other words, 2022 has been rare in terms of both the timing of the YTD high and YTD low.

Looking at the charts, you’ll also notice that the only other year with a similar setup where the Nasdaq made its YTD high in the opening two weeks of the year and its YTD low in the final two weeks was in 1973.  In 1973, the YTD closing low occurred 239 trading days after the YTD closing high, but this year it will be at least 248 trading days separating the two. 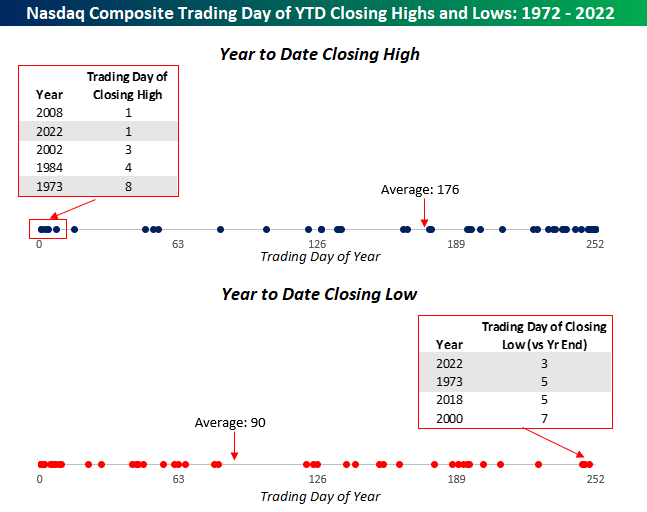