“Economics is extremely useful as a form of employment for economists.” – John Kenneth Galbraith

Economists will be working hard this morning as a large batch of economic data was just released.  Initial Jobless Claims were right in line with forecasts while Continuing Claims were modestly higher than expected.  Personal Income and Spending were both right in line with forecasts at 0.4% and 0.6, respectively.  PCE inflation data was slightly higher than expected while Durable Goods Orders rose 2.5% which was ahead of expectations.  Even after all that data, though, equity futures are little changed from where they were before the data was released.  Still on the docket, we have Michigan Confidence and New Home Sales at 10 AM and natural gas inventories at 10:30.

Since its intraday low on Monday, the small-cap Russell 2000 has rallied more than 5.5% and yet still only modestly above the level it opened at last Thursday.  Talk about a volatile stretch!  A lot of bullish investors want to call the bottom of the small-cap correction.  While the downtrend from the November high appears to have been broken, the Russell still has something to prove with both the 50 and 200-day moving averages, which are both now sloping downwards, looming above.  In a bearish tape, these levels typically act as resistance.  If the tape is really turning bullish for small caps, these moving averages will need to be taken out. 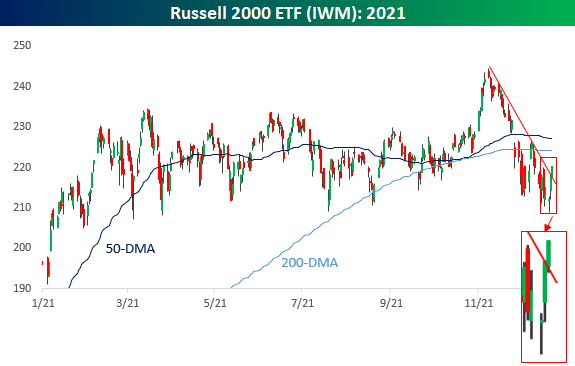