The President reminded markets last night that you should never count your chickens until they are hatched. After stimulus seemed like a done deal yesterday, the President’s Twitter announcement last night that unless COVID relief payments were increased from $600 to $2000 per American, he may not sign the bill.  Whether this is just a bluff remains to be seen, but it definitely throws a wrench into the plans of lawmakers in DC, but more importantly, Americans who were just yesterday planning on receiving some relief.

It’s already been a busy morning of economic data.  Durable Goods were mixed relative to expectations and Personal Income and Spending saw larger than expected declines.  The one bright spot was employment as both Initial and Continuing Jobless Claims came in significantly better than expected.

Be sure to check out today’s Morning Lineup for updates on the latest market news and events, a discussion of President Trump’s veto threat, mortgage applications, an update on the latest national and international COVID trends, and much more.

Looking at some areas of the market these days, it seems as though the equity market does nothing but go up.  While that may be the case in certain sectors, for the broader market we’ve essentially been experiencing a sideways consolidation for most of this month helping the S&P 500 work off overbought conditions.

The first example of this can be seen in the S&P 500’s 50-day moving average spread.  While the S&P 500 traded at extreme overbought levels in mid-November, those extremes have been gradually worked off in the last month, and as of yesterday’s close, the S&P 500 was just barely at overbought levels. 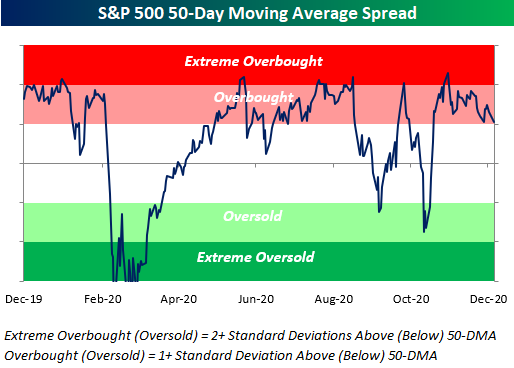 For individual stocks, it’s a similar picture.  Back on 11/16 when the S&P 500 reached its peak overbought reading, 73% of stocks in the S&P 500 were trading at overbought levels.  In the month and a week since then, though, the legion of overbought stocks has been winnowed down to less than half of its recent peak level to yesterday’s reading of 32.4%.  Markets can’t go straight up forever, but periods of consolidation like the ones we have seen in recent weeks are often just the rest markets needs after a sharp run higher. 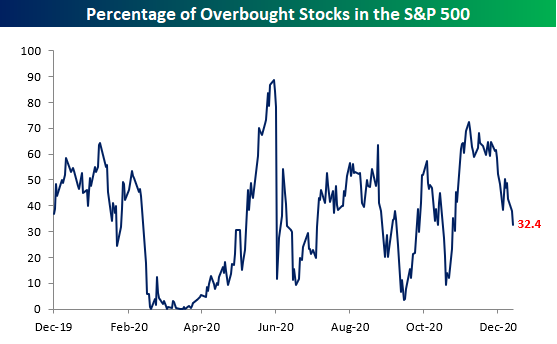