“Our liquidity is fine. As a matter of fact, it’s better than fine. It’s strong.” – Kenneth Lay

Today marks the 20-year anniversary of the Enron bankruptcy, and if you think the last few days in the market have been lousy, it was nothing compared to late 2001 when we were in the middle of the dot-com bust, coming out of 9/11, and heading into another rough year in 2002 when Worldcom eventually collapsed as well.

Futures are higher this morning, but traders aren’t even waiting until the opening bell to raise cash as Nasdaq futures have reversed into the red and the Dow and S&P 500 have also given up much of their earlier gains.  One of the main culprits behind the weakness this morning is a report from Bloomberg that Apple (AAPL) has told suppliers that demand for the iPhone 13 after the holidays may not be as strong as previously estimated.  AAPL had been a bright spot in the Nasdaq over the last few trading days but is trading down over 3% in the pre-market.

Yesterday was an extremely disappointing day for small caps as the Russell 2000 rallied more than 2% intraday only to give it all back and a lot more throughout the trading day.  By the time the closing bell rang, the Russell 2000 was down over 2% on the day.  Since the Russell 2000 tracking ETF (IWM) launched in early 2000, yesterday was just the 9th time that the ETF saw a similar intraday rally (+2%) only to finish the day down more than 2%.  Each of those days is shown as a red dot in the chart below.  Despite over 20 years of trading history for IWM, all eight prior occurrences were confined to a two-month period in 2008 (six occurrences) and a three-week period in 2020 (two occurrences).

Unlike yesterday’s reversal, most of the other occurrences came well into market declines.  The only exception was on 3/3/20.  Interestingly enough, that occurrence also followed a period of sideways trading for the Russell where it broke out of a multi-month range (but didn’t reach a new high) only to reverse and sell-off sharply into the COVID crash.  It’s unlikely the Omicron variant will cause the same sort of market turmoil that COVID initially created in early 2020, but the Fed is certainly not going to be nearly accommodative going forward as they have been since early 2020.

This morning, Russell 2000 futures are indicated higher by about 1%, but to put that in perspective, the gain isn’t even enough to bring the index back to where it was trading 15 minutes before the close yesterday. 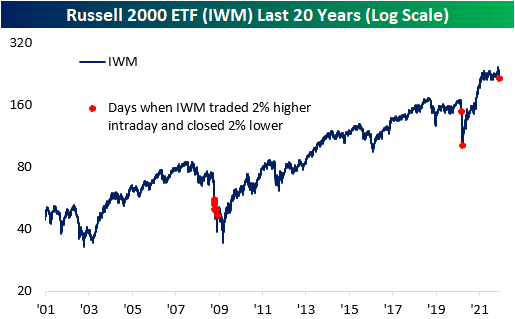