“It isn’t what we say or think that defines us, but what we do.” – Jane Austen

A bad week just keeps getting worse as futures are continuing their post-FOMC sell-off.  Heading into this week, the thought of weaker CPI and the Fed signaling a step down to 25 bps hikes at future meetings would have been considered a positive.  That’s exactly what we got, but after an initial surge following Tuesday’s CPI, equities have been doing nothing but trading lower.  Hawkishness from the FOMC and ECB has investors concerned that rates will be higher for longer raising the odds for a hard landing.

Well, 2022 you’ve finally done it.  If there was any doubt about how bad of a year it has been, today’s decline in the S&P 500 will move 2022 into the lead for the largest number of 1% declines to close out the trading week going back to 1952 when the NYSE started the current five-trading day workweek.  Heading into today, there were 15 declines of at least 1% in the S&P 500 on the last trading day of the week which was tied with 1974 and 2008 and one ahead of 2000 for the most in a single year. 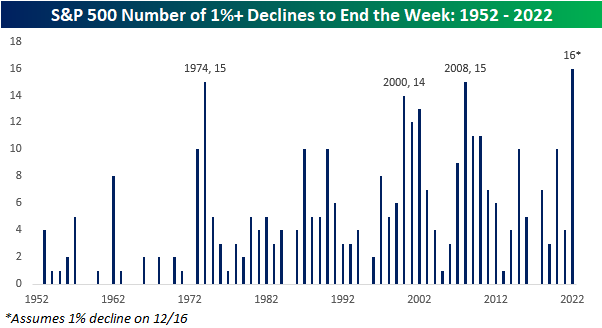 Despite the record number of 1%+ declines to close out the week, the S&P 500’s cumulative decline this year on the last trading day of the week has been a decline of less than 9%.  The reason is that not only has this year seen the highest frequency of 1%+ declines to close out the week, but it also tied with 1999 for the highest number of 1%+ gains (14). 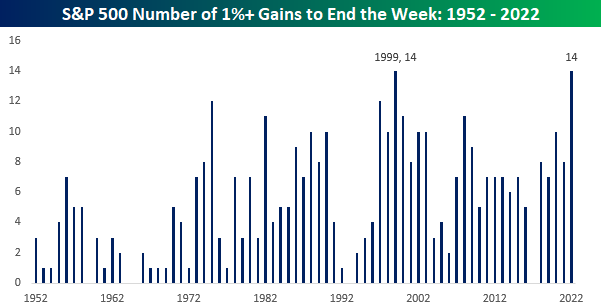 All in, including today, the S&P 500 has ended the week with a gain or loss of at least 1% 30 times this year, or 60% of the time!  Talk about an emotional market.  And there are still two Fridays left after today! 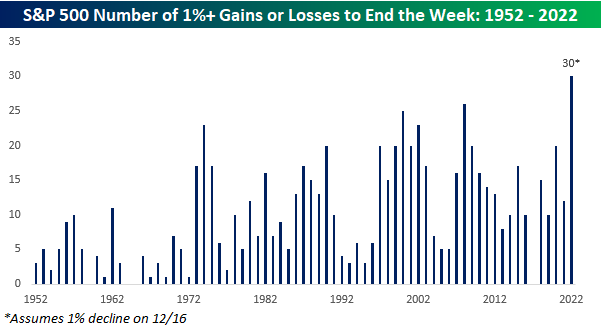