If you insist on certainty, you will paralyze yourself.“ – J. Paul Getty

Ahead of today’s FOMC meeting, we just got some important economic data in the form of Empire Manufacturing, Retail Sales, and Import Prices.  Overall, the results weren’t very good.  While Empire Manufacturing came in better than expected, retail sales were much weaker than expected at both the headline level and ex-autos and gas.  Headline retail sales came in at just 0.3% versus expectations for a gain of 0.8%.  When you factor in inflation, though, sales were negative.  Lastly, import prices rose more than expected coming in at 0.7% versus forecasts for an increase of 0.6%.  On a y/y basis, import prices were up 11.7%.

Futures were flat heading into the report, and have actually picked up a little steam with Nasdaq leading the way.  In addition to these reports, Business Inventories and homebuilder sentiment from the NAHB will be released at 10 AM.

While the stock is already down 4% from its intraday high on Monday, shares of Apple (AAPL) still remain about 25% above their 200-day moving average (DMA).  That’s off the recent high of 28% back on Friday, but it’s still elevated relative to history.  Going back to 2011, there are only two periods where the stock’s spread relative to its 200-DMA reached significantly higher levels than 25% while there are another three (2014, 2017, and 2018) where the spread reached similar levels before pulling back. 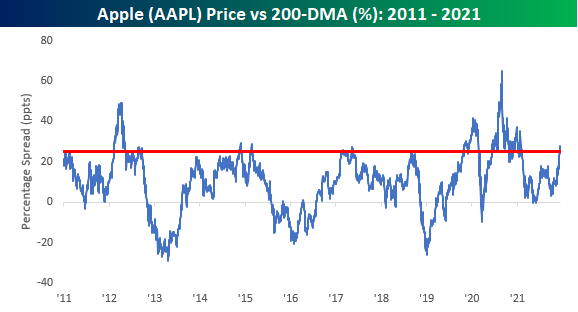