“What the wise do in the beginning, fools do in the end.” – Warren Buffett

After four days in a row of losses, equities are looking to break the streak today.  The FOMC begins a two-day policy meeting today, so any news on that front won’t be out until tomorrow.  In economic data this morning, Import Prices missed expectations (0.1% vs 0.3%) while export prices were higher than expected (0.6% vs 0.2%).  The Empire Manufacturing report for December came in slightly weaker than expected (4.9 vs 5.4), but considering the rising caseloads and concerns over their economic impact, it’s encouraging to see that this reading is still positive at least.

Be sure to check out today’s Morning Lineup for updates on the latest market news and events, a recap of economic data out of China, an update on the latest national and international COVID trends, and much more.

What a year it has been for the US Dollar.  At the height of the pandemic, flows into the dollar surged as investors sought safety in the uncertainty.  At its peak in March, the US Dollar Index surged to its highest level in over three years (January 2017).  As concerns over the pandemic eased, though, all of those inflows quickly unwound, and now less than nine months later, the Dollar Index is trading at its lowest level in more than two years (April 2018). 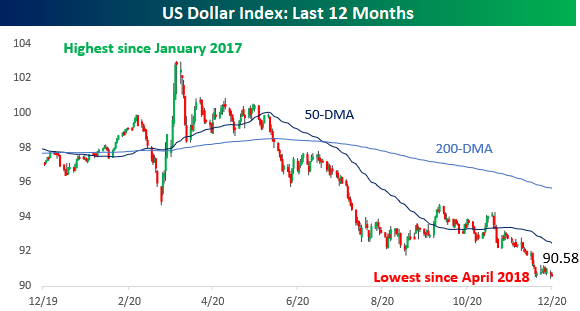 While pot stocks or emerging market currencies have no problem with swinging wildly from multi-year highs to multi-year lows in a matter of months, for an asset like the US Dollar, moves of this magnitude are much less common.  The chart below shows the number of days in each year that the US Dollar Index has closed at a two-year high (blue bars) or a two-year low (red bars). Going back to 1973, a period spanning nearly half a century, there have only been three other years where the Dollar Index has closed at two-year highs and two-year lows in the same year.  Those years were 1985, 1994, and 2008. 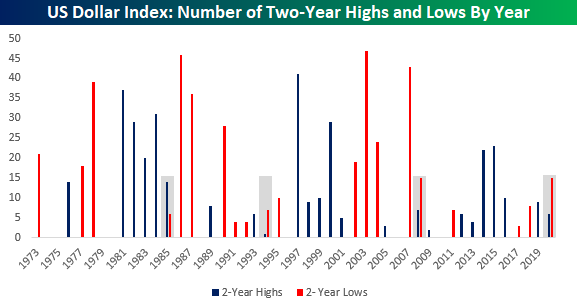