“It’s a proprietary strategy. I can’t go into it in great detail.” – Bernie Madoff

One day short of 14 years after Bernie Madoff surrendered to authorities for his Ponzi scheme, Bahamian authorities arrested Sam Bankman-Fried yesterday in connection with his massive fraud in the cryptocurrency markets. Now that he’s behind bars, we can only hope that the nonstop media tour he has been on will come to an end.

We’ve got two very important days ahead for the markets with today’s November CPI and tomorrow’s FOMC rate decision. Futures are sharply higher heading into this morning’s release after a strong day yesterday, but hopefully, the markets haven’t set the bar too high.

While there is optimism among investors that the worst of inflation is behind us, the sentiment from two sectors that stand to benefit the most from inflation – Energy and Materials – has been mixed. The charts below show the relative strength of the S&P 500 Energy (XLE) and Materials (XLB) sectors versus the S&P 500 over the last ten years (top chart) and just the last year (bottom two charts).
Starting with the long-term picture, after years of underperformance, both Energy and Materials made a trough relative to the S&P 500 in 2020.  While they have both stopped the bleeding, the rebound in Energy has been much stronger than the improvement in Materials (which never underperformed as much in the first place). 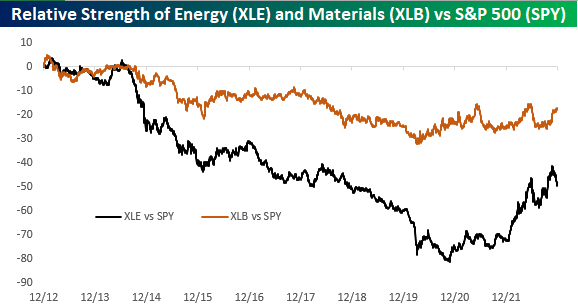 Over the last year, both sectors have significantly outperformed the market.  Starting with Materials, its outperformance peaked in the spring and then came crashing back down to earth in the summer.  The sector started outperforming again this fall, but in recent weeks it has started to run out of steam again. 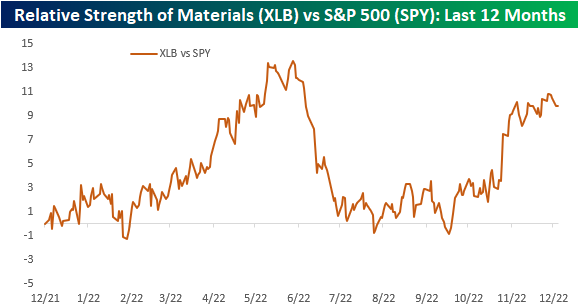 In the case of both sectors, their relative strength in recent weeks hasn’t been nearly as strong and steady as it was in the first half of 2022, but they are also far from collapsing reflecting the fact that while inflation pressures have not been as intense as they were earlier in the year, they still haven’t gone away. 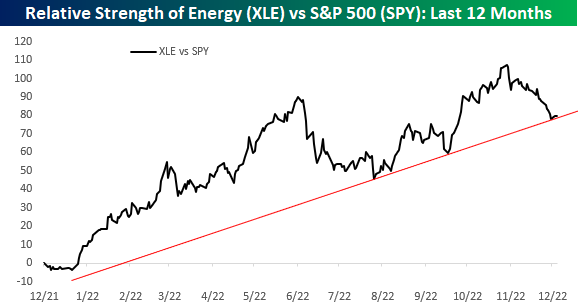