“To be a better investor, you have to stand on your own. You just can’t copy other people’s insights.” – Li Lu

If you had asked investors last Monday morning if they thought the S&P 500 would be trading at a record high to close out the week, you probably wouldn’t have gotten many takers.  Surprising people is what the market likes to do best, though, so that’s exactly what it did last week.  To kick off this week, futures were higher overnight but have given up much of those gains although they are still modestly positive.  Bitcoin had a brief move above $50K over the weekend, but it has been pulling back in trading today and is back below $49K.

Mid-December is typically when things start to slow down into year-end, but this week will be busy for central banks.  Not only will the Fed make its policy announcement on Wednesday, but we’ll also get policy decisions from more than ten other central banks this week, including the Eurozone, UK, Japan, and Russia.

You know it was a good week in the equity market when sectors that lagged were still up over 2.5%.  In last week’s nearly 4% rally for the S&P 500, all eleven sectors were not only higher on the week but they were also all up over 2.5%.  Leading the way higher, it was Technology (XLK), which surged 5.9% thanks in large part to Apple’s (AAPL) gain of more than 10%.  After Technology, the two sectors rounding out the top three were Energy (XLE) and Consumer Staples (XLP) which gained 3.81% and 3.66%, respectively.  It’s not often that you see Technology on the leaderboard with sectors like Energy and Consumer Staples.  In spite of last week’s surge, just five sectors are currently at overbought levels with Financials and Communication Services the only two sectors that are still below their 50-day moving averages. 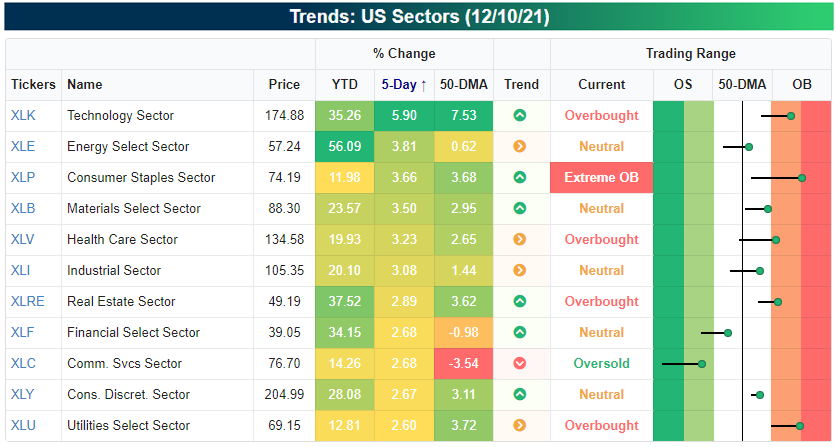