“Diplomacy is the art of telling people to go to hell in such a way that they ask for directions.” – Winston Churchill

Lawmakers on both sides of the Atlantic are in intense discussions, but the involved parties in both sets of talks have yet to reach an agreement.  Over in the UK, negotiators in the UK and EU have been at a stalemate and European Commission President Von Der Leyden says no deal is the most likely outcome of current talks. Closer to home in the US, lawmakers in Washington haven’t quite told each other to go to hell, but they still can’t agree on the terms of a new round of fiscal relief.

Futures are lower heading into the last trading session of the week as all of the major averages with the exception of the Russell 2000 are set to finish the week lower.  Don’t tell that the this week’s latest round of IPOs, though.  As noted in today’s Morning Lineup, they’ve been on fire lately.

Be sure to check out today’s Morning Lineup for updates on the latest market news and events, a recap of recent IPO performance, an update on the latest national and international COVID trends, and much more.

After yesterday’s rally in the Nasdaq, we wanted to provide a quick update on its intraday performance over the last three weeks. Even after yesterday’s rebound, the Nasdaq remains well below the uptrend it broke earlier this week.  Looking forward, that level is likely to act as short term resistance on any bounce. 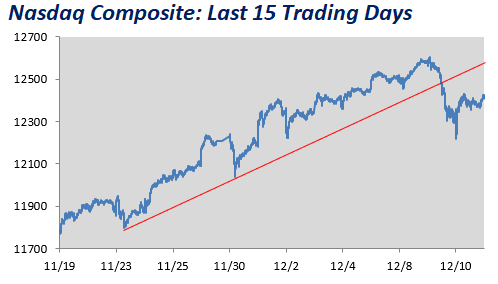 Similar to the Nasdaq, the S&P 500 also broke its uptrend earlier this week, but not to quite the same degree as the Nasdaq.  Like the Nasdaq, though, that former uptrend line is likely to act as a short-term speed bump on any bounce. 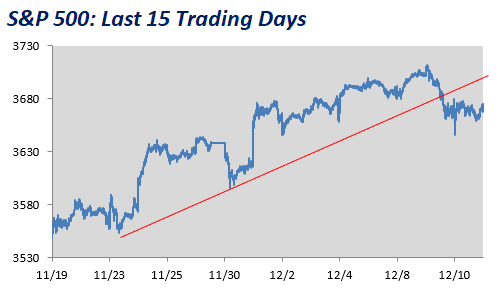 Lastly, while most investors wouldn’t touch long-term treasuries at this point, they’ve actually performed quite well over the last few trading days and will likely break this short-term downtrend in today’s trading. 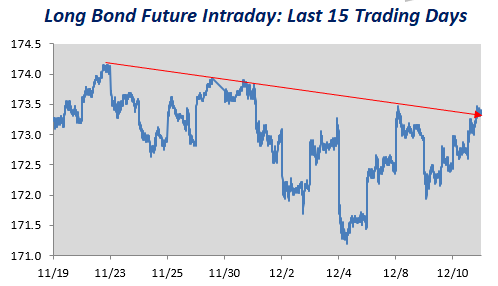