Following yesterday’s move of just six cents (not basis points but cents) in the Dow, European markets are similarly quiet this morning with the FTSE-100, the CAC-40, and DAX, all trading within 0.1% of their respective closes on Thursday.  However, just as the Dow’s move wasn’t entirely representative of the action in US stocks yesterday, the fact that indices are little changed on the day doesn’t reflect that all of those major European indices are well off their lows of the day.

There may not be a lot of direction in equity markets so far this morning, but there’s a good chance that the release of November CPI could act as a catalyst for more of a move throughout the day, although  there wasn’t a lot of optimism heading into the report that the reading would come in light,

Once CPI is out of the way, investors can shift their focus to next week’s FOMC announcement on Wednesday.  Given Powell’s hawkish pivot right after Thanksgiving, it’s hard to imagine what the Fed could say next week that would really be a surprise to investors at this point.

With all the volatility we have seen in the S&P 500 over the last month, the largest stock in the S&P 500 has been remarkably calm.  The S&P 500’s performance over the last month has been a marginal gain of less than half of a percent, but shares of Apple (AAPL) have rallied over 18%.  With a performance spread of more than 17 percentage points, the gap between AAPL and the S&P 500 over the last month has been the widest since August 2020, and before that, you would have to go all the way back to August 2013 to find another time that the spread was wider.  There have been plenty of times in the past where AAPL has followed a different path than the broader market, but you don’t often see the gap get wider than it is now. 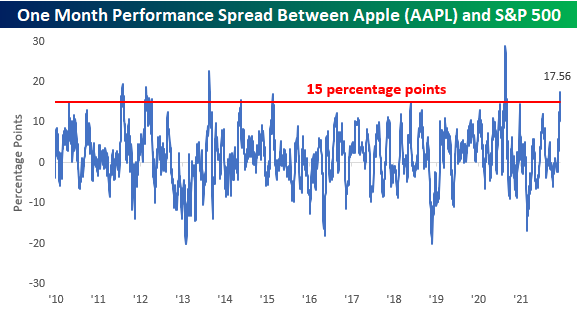