You may think that the market has been volatile over the last several trading days, but just be thankful it’s not 1824.  Back in November of that year, no candidate for President received the required majority of electoral votes in the election which forced Congress, on December 1st, to turn the election over the House of Representatives and basically choose between Andrew Jackson and John Quincy Adams.  The actual winner wasn’t decided for more than two months when John Quincy Adams came out on top in early February 1825.  Despite coming in second in the actual election, Adams’ victory came thanks to the backing of Henry Clay in what was called the ‘Corrupt Bargain’, and because he wasn’t the most popular candidate in the election, Adams’ presidency was largely considered to be unimpactful.  Can you imagine in this political climate if the House was actually deciding an election today?

Futures are higher this morning as investors can’t decide which way they want the market to go as the S&P 500 goes back and forth between 1% losses and 1% gains in a game of ‘Loves Me, Loves Me Not’.  One thing to note is that just as Monday’s 1% rally was weaker in magnitude than Friday’s drop, we’re seeing the same pattern play out today where the S&P 500 is on pace to open higher by 1.4% after Tuesday’s 1.95% decline.

On the data docket today, the ADP Private Payroll report for November was released at 8:15 AM and came in higher than expected with little impact on futures.  The only two other reports on the calendar today are Construction Spending and ISM Manufacturing which will be released at 10 AM.  Powell and Yellen will also be testifying in front of the House this morning, and yesterday, the S&P 500 was only down modestly while the Nasdaq was actually higher before Powell’s testimony.

2021 has really been a pretty crazy year for small-cap stocks.  After doubling from its COVID lows, the Russell 2000 peaked in early March and traded in a sideways range through the summer and into the fall.  After several close calls at a 10% correction, including a 9.7% drop on a closing basis through mid-July, the Russell finally broke out of its trading range in early November to trade at a new record high.  From its first new high on 11/2, though, the breakout for IWM didn’t last long.  After rallying an additional 3.4% in the four trading days since its first new closing high since March, it’s been a one-way trip lower for small caps ever since, and through yesterday’s close, IWM closed down 10.1% from its record high earlier this month.  What the Russell couldn’t do in more than six months from early March through the end of Summer, it did in just 15 trading days this month! 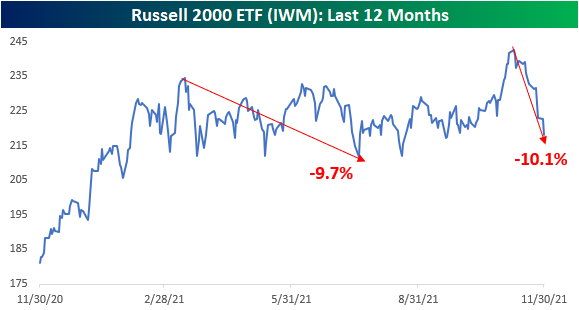