“Once you replace negative thoughts with positive ones, you’ll start having positive results.” – Willie Nelson

If you thought the midterm elections were behind us, think again.  Polls have been closed for nearly 12 hours in most jurisdictions, but the results of many contests are still up in the air.  Markets hate uncertainty, so as you might expect, equity futures are lower heading into the opening bell, but the losses at this point, have been relatively contained.  The economic calendar is quiet today, but tomorrow’s CPI looms on the horizon, and we’re still getting a heavy dose of earnings reports.  The recent trend has not been nearly as strong as it was earlier in the reporting period as instances of lowered guidance have become increasingly common.

No matter what the results of the midterm elections were, people were going to wake up in a bad mood this morning.  In some ways, the fact that there has been so little change in either direction only makes things worse since no one will be happy.  Relative to expectations, Democrats clearly outperformed most expectations, though.  Whatever your mood this morning, though, get over it.  Like oil and water, politics and investing don’t mix, and you should never let your political ideology cloud your investment decisions.  Relative to yesterday, very little has changed.  The Fed is still aggressively hiking rates, the economy is weakening, and the stock and bond markets are at the tail end of one of their worst years in history.

As far as last night’s results go, nothing is final, but based on current estimates, the House looks like the razor-thin majority is going to shift from the Democrats to the Republicans, while Democrats are expected to maintain control of the Senate.  Going back to WWII, it hasn’t been unprecedented to see smaller changes in the makeup of Congress during a midterm election, but this year’s results will likely end up near the more muted extreme at a time when no side had a decisive majority.  Obviously, this is all subject to change, but what really stands out to us is how evenly divided the country is right now.  The current rivalry between Republicans and Democrats stacks right up there with some of the biggest sports rivalries in history.  Every two years the two sides completely go at it, taking things right down to the wire, and even many times ending up in overtime or a runoff somewhere to see which party comes out on top. 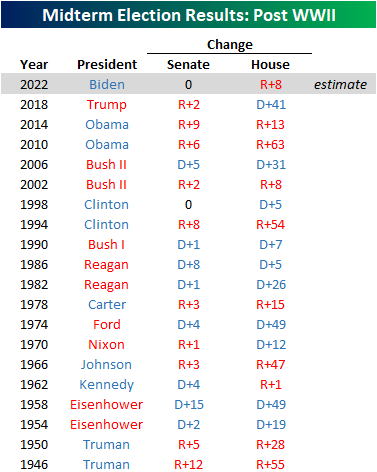