Election Day is here, and hopefully, that means when we all come in tomorrow morning, the midterms will be behind us and markets can shift their focus to Thursday’s CPI.  Futures are higher this morning in a modest drift higher, and the market attempts to digest the impact of higher rates.  Earnings reports are still coming in hot and heavy, but the majority of the S&P 500’s largest companies have already reported, so until the retailers start reporting next week, there aren’t likely to be any major tape bombs.

We won’t know until after all the votes are counted, but betting markets and many national polls suggest that like 1994, the Republican Party will win control of both the Senate and House.  Given the already closely divided nature of both chambers of Congress, though, the number of seats expected to be picked up in this cycle is expected to be much smaller (3 in the Senate and around 30 in the House).  Barring an extreme outcome (in either direction), though, there is unlikely to be much in the way of changes legislatively, so get ready for two years of gridlock.

As big as the Federal government has become over the decades, the impact of party control on financial markets tends to get overstated.  While it most definitely has impacts on certain industries, the direction of the economy and financial markets won’t be dictated by the actions of a few hundred people in DC.  Or at least that’s what we like to think, even though sometimes it seems as though that’s all the market is focused on.

Taking a stroll down memory lane, the chart below shows the performance of the S&P 500 in the year leading up to and after the 1994 midterm elections.  It’s obviously only a sample size of one, so we would put little weight on it, but in an environment where good news is hard to come by, bulls will take whatever they can get.  In the year leading up to the 1994 election, the S&P 500 essentially traded sideways as the markets and economy were pressured by a hawkish Fed and what would be the Orange County bankruptcy, but the year after that midterm election saw the S&P 500 surge 27.1%. 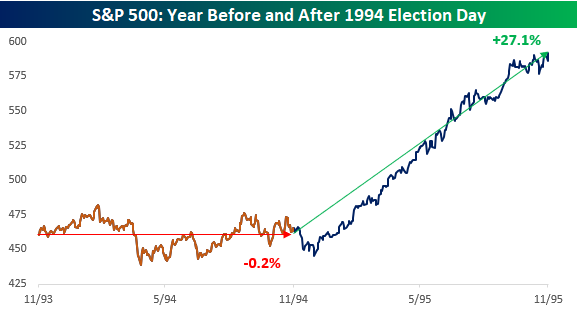