“Information is not knowledge.” – Albert Einstein

When you turned on your TV to one of the financial networks or cable news channels this morning that wasn’t your DVR showing yesterday’s news.  The election still hasn’t been decided and equities are once trading sharply higher.  Over the course of the last 24 hours, not much has really changed.  The path for the President is looking increasingly narrow, and markets seem to be content with the prospect of gridlock.

In economic news, both initial and continuing jobless claims came in modestly higher than expected.  Non-farm productivity was a bit weaker than expected, and Unit Labor Costs were less bad than forecast.  While it was easy to overlook given all the other news, don’t forget that there is also an FOMC decision this afternoon!

Be sure to check out today’s Morning Lineup for a rundown of the latest stock-specific news of note, election analysis, trends related to the COVID-19 outbreak, and much more.

An interesting trend to note about recent election cycles is that they have become increasingly volatile.  Going back to 1996, the S&P 500’s average percentage move the week before Election Day has been a move of +/-3.6%.  That’s more than twice the average pre-election move of the prior 17 election cycles going back to 1928.  Similarly, the S&P 500’s average election week performance has been a gain or loss of over 4%.  Likewise, that’s also just about twice the prior average of election cycles spanning 1928 to 1992!

With all the information investors have had at their fingertips in the last 25 years, you would expect that it would dampen volatility in reaction to big events like elections, but the data of the last 25 years since Netscape – the first mainstream internet browser – was launched shows a much different outcome. Information is often confused with knowledge, but as Einstein succinctly put it, the two aren’t the same. 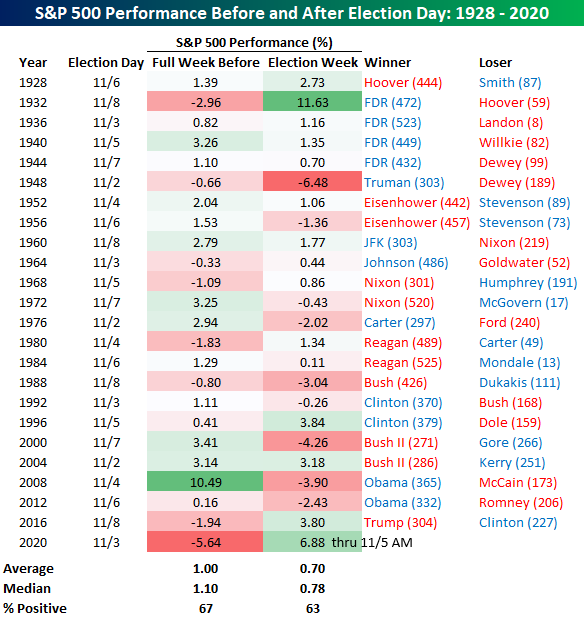