“There is nothing government can give you that it hasn’t taken from you in the first place.” – Winston Churchill

European stocks are trading higher this morning as inflation in the region came in at a weaker-than-expected 10% y/y. 10%!  If that doesn’t sum things up for 2022, we don’t know what does.  Economists were forecasting the headline number to come in at 10.4%, but with the m/m reading actually falling 0.1% in November, markets are rallying.

Futures here in the US are also higher on the positive inflation data out of Europe, but there’s still a lot of data on the calendar to contend with starting off with the November ADP Employment report which came in at a weaker-than-expected 127K (estimate 198K).  The second read of Q3 GDP, Core PCE, and Personal Consumption will all be released at 8:30, and then at 10 AM, we’ll get the October report on Pending Home Sales.   The 8:30 data was just released and came in mixed relative to expectations with GDP revised higher while PCE came in higher than expected.  Besides all the economic data, Powell’s speech at the Brookings Institution at 1:30 is likely to be the biggest market mover of the day.

While US stocks are set to end the month of November with modest gains, stocks in Hong Kong have been on a tear as the benchmark Hang Seng index rallied an astonishing 26.62% for its largest monthly gain since October 1998 and just its ninth monthly gain of 25% or more since 1970. As great as this month’s rally in Hong Kong stocks sounds, we would note that since the end of August, the index is still down nearly 7%, and YTD it’s down over 20%.  Again, these performance numbers are after you factor in November’s rally.  The S&P 500 may only be up 2% this month, but since the end of August, it is actually up fractionally, and YTD it’s not down as much as the Hang Seng. 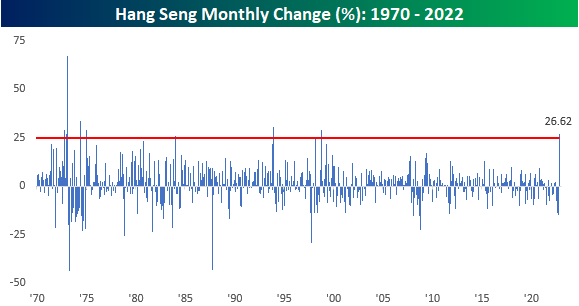 You’ve likely heard the phrase that big market moves tend to occur during bear markets but in the case of the Hang Seng and monster moves, that hasn’t entirely been the case.  The chart below shows Hong Kong’s benchmark index going back to 1970 with red dots indicating every time the index moved 25% or more in a month.  Looking at the chart, more of these moves actually tended to occur in the later stages of bull market runs or early on in a rally.  What is unique about November’s move is that it is only the second time that the index rallied 25%+ but was still down over the trailing three months.  The only other time that occurred was in January 1975 when the Hang Seng rallied more than 28% but was still down nearly 2% over the last three months. It’s a sample size of one, but bulls wouldn’t mind if history repeated itself. 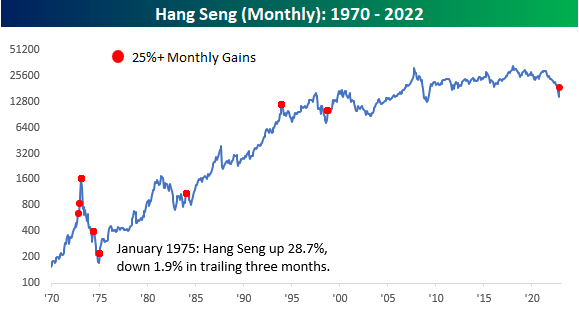