I have an idea about voting, how about on every ballot we include “None of the above”. Imagine if you won the election but lost to ‘None of the Above’. Wouldn’t that make you re-think your positions?” – Jesse Ventura

Futures markets are indicating a continuation of the 2016 market script we discussed yesterday, and polls have shown some signs of tightening up in some battleground states.  Will there be another Election night surprise this Election Cycle?  Stay tuned.  Economic data is on the light side today, but there’s a steady pace of earnings after the close.

Be sure to check out today’s Morning Lineup for a rundown of the latest stock-specific news of note, market performance in the US and Europe, key earnings data from the US and Europe, trends related to the COVID-19 outbreak, and much more.

Former North Carolina senator and presidential candidate John Edwards made the theme of ‘Two Americas’ popular in 2004 and 2008 in terms of the United States increasingly becoming a country of haves and have nots.  Within the equity market as well, we also see the theme of ‘two markets’ playing out.  Starting with the S&P 500, the index bounced off support yesterday after its worst full-week performance leading up to a Presidential election in its history.  The S&P 500 already made a lower high in October, so any bounce here that fails to take out the high from October will result in a second lower high. 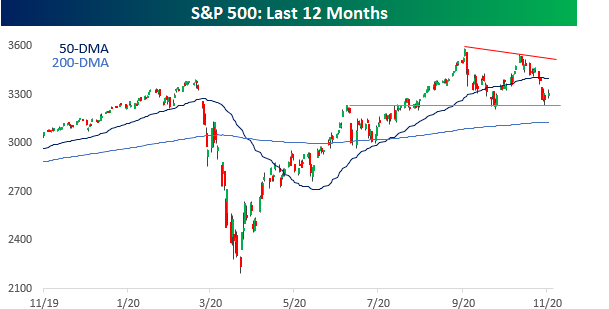 For the Russell 2000 – an index which heretofore had been underperforming the S&P 500 by a wide margin – the technical picture looks more positive.  When the broader market rallied in September and early October, rather than make a lower high, it actually made its second higher high.  Then, in the subsequent pullback, it found support at its uptrend off the March lows, making what could turn out to be a higher low.  The seemingly constant underperforming Russell 2000 now looks like more of a leader than the S&P 500. 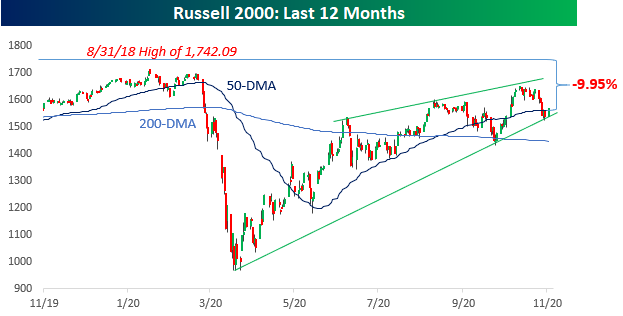