“The individual investor should act consistently as an investor and not as a speculator.” – Benjamin Graham

We’re seeing a mixed tone in equity futures this morning after a pretty significant negative reversal in equities yesterday.  Continuing the trend from yesterday, Dow futures are indicated slightly higher, S&P 500 futures are flat, and the Nasdaq is lower, but all three indices are off their overnight lows.  While earnings season unofficially ended last week, it’s been a busy morning for earnings as companies squeeze in results today ahead of the Thanksgiving holiday.  In terms of investor reactions to the report, it has been mostly negative with stocks like Abercrombie (ANF), Best Buy (BBY), Urban Outfitters (URBN), and Zoom (ZM) all down between 5% and 10%.

Where the real action has been the last two days is in the Treasury market, especially the two-year where the yield is on pace for a two-day increase of 14 basis points (bps).  If these levels hold through the end of the day, it would mark the biggest two-day increase in the two-year yield since March 2020.

In economic news, European flash PMI readings for the month of November were released and came in better than expected at the headline level despite the rising COVID case numbers. Internals of the reports, however, were not quite as strong.  The US calendar today also includes flash PMI readings for November as well as the Richmond Fed.  Next week will be an extremely packed calendar as it will be the last day of economic releases for the week.

Lastly, in what was a widely expected move this morning, the US announced that it would release some oil from the Strategic Petroleum Reserve in coordination with other countries including China, India, Japan, Korea, and the UK. Given the move was widely expected, the market reaction has been muted.

As shown in the charts below, while value stocks were correcting last week (charts on left), the rally in growth stocks went on unabated, and yesterday’s reversal appears to have been a bit of catch-up trade. 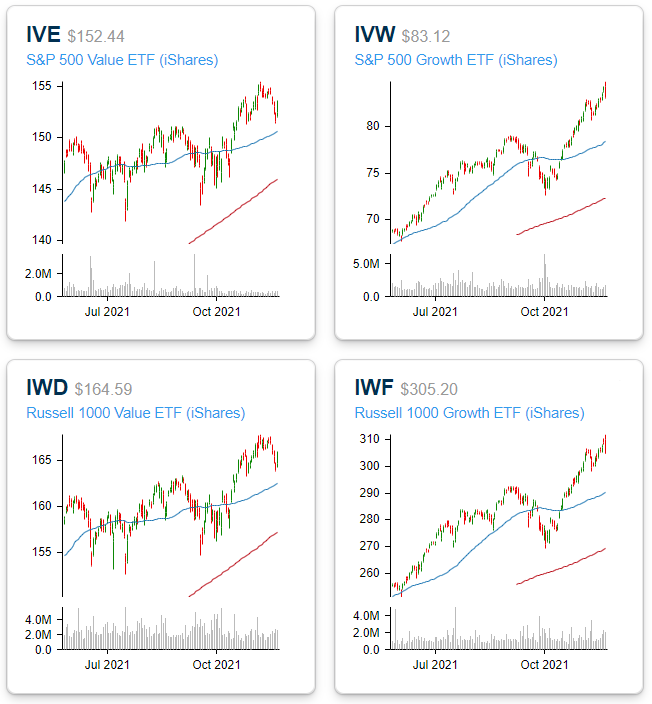