“The one unchangeable certainty is that nothing is certain or unchangeable.” – John F Kennedy

There’s been little in the way of major news this morning.  In the retail space, we’ve seen some positive earnings reports from Best Buy (BBY) and Dick’s Sporting goods (DKS), although Dollar Tree (DLTR) and Zoom (ZM) are under pressure following disappointing results relative to expectations.  There’s little in the way of economic data on the calendar as the Richmond Fed regional report is the only release scheduled (10 AM), but there are a number of Fed speakers slated to speak, including Cleveland Fed President Mester, KC Fed President George, and St Louis Fed President Bullard.  Can’t these people take a break for Thanksgiving?

The story of 2022 has been one where the market has been constantly playing catchup to the Fed’s aggressive pace of monetary tightening.  Back in May when the market thought 75 bps was off the table, it quickly had to change course as the Fed went on to hike rates by 75 bps at each of the last four meetings.  Periods where the market finds itself playing catch up to a tighter reality aren’t a good setup for equities.

With just over three weeks between now and the next Fed meeting, have investors finally caught up to the Fed?  Based on comments from Loretta Mester like “I don’t think we’re anywhere near stopping,” you would think that the market is still behind the Fed, but that may not entirely be the case.  Even hawkish officials have publicly stated openness to ratcheting down the pace of rate hikes, and that’s a big change from where we were.  Throughout all of August, September, and the first half of October, the market was steadily raising its forecasts for policy rates, and not surprisingly, stocks were under pressure.  In mid-October, though, the odds of a 75 bps hike at the December meeting peaked at 77% and have been steadily declining to less than 20% today. It’s no coincidence that during that same stretch, equities have rallied.  It sounds pretty obvious, but as long as the market remains on the same page as the Fed or finds itself playing catch up to a less aggressively hawkish policy path, equities should benefit from a tailwind. 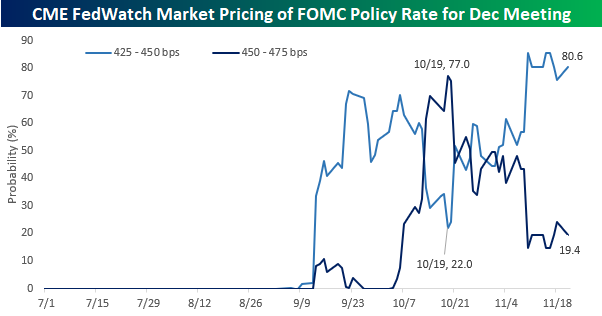