“At its essence, good leadership isn’t about being indispensable; it’s about helping others be prepared to possibly step into your shoes” – Bob Iger

Outside of Disney (DIS), it’s been a very quiet morning in US markets.  Futures are down, but they’re off their lows.  The Nasdaq is leading the declines with a decline of 0.5%, and the economic calendar is quiet with the Chicago Fed National Activity Index the only report on the calendar.  One bright spot this morning has been related to the Fed.  While most speakers of late have been hawkish, Atlanta Fed President Bostic said he favors smaller rate hikes and a terminal rate of between 4.75% to 5.00%.  Unfortunately, he’s not a voter.

Hollywood loves sequels, and investors are hoping for a good one this morning on the news that Bob Iger is returning to Disney (DIS) to replace Bob Chapek. In response, DIS shares have rallied nearly 10% which would be the best day for the stock in nearly two years.  Based on the performance of DIS stock under Iger versus Chapek, you can understand the optimism.  During the nearly 15-year tenure of Iger, DIS stock rallied more than fivefold for an annualized gain of 13.9% including dividends versus the S&P 500’s annualized total return of 8.8%.  Under the less than three-year tenure of Chapek, DIS stock has declined more than 28% for an annualized decline of more than 11.5% versus an annualized gain of 10.8% for the S&P 500.  Put another way, it took less than three years for Chapek to undo all of the outperformance that DIS shares racked up under Iger.

It wouldn’t be fair to put all the blame for Disney’s underperformance on Chapek.  Iger stepped down just as COVID was arriving on US shores, so he benefitted from good timing.  There’s also been massive disruption in the media space, so who knows how a DIS under Iger would have navigated these storms.  Chapek was also Iger’s hand-picked successor, and as Iger himself once said, good leadership is about helping others be prepared to possibly step into your shoes. So Chapek’s disappointing tenure doesn’t exactly reflect all that well on Iger.

Whatever the circumstances were under Chapek’s tenure, you can only play the hand your dealt.  The numbers are the numbers, and that’s why investors are so excited this morning.  Just like Hollywood, Wall Street loves sequels.  Let’s just hope for Disney investors, the Iger sequel is a success more of a Godfather II or Top Gun Maverick than a Jaws 2. 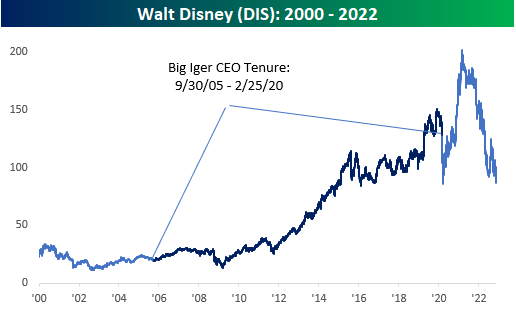