Futures have been fluctuating around the unchanged line this morning, and a stronger-than-expected ADP Private Payrolls report earlier currently has them on the south end of the flatline. Treasury yields are also in a holding pattern ahead of the Fed later today and the 10-year yield is a few basis points above 4%.

In his post-meeting press conference on May 4th, Jerome Powell, after hiking rates by what at the time was an abnormally large 50 basis points (bps), put investors at ease by telling CNBC’s Steve Liesman that the committee wasn’t’ actively considering a 75-bps rate hike.  As the headlines the next day read, 75 bps was ‘off the table’. In the six months since those comments were made, it has been an all-you-can-eat buffet of 75 bps hike, and the overwhelming consensus is that today will be the fourth such hike of that magnitude.  In fact, CME’s FedWatch tool currently puts the odds of a hike of less than 75 bps at just 12.5%.

What changed after May 4th that caused the Fed to shift direction so sharply?  Well, it all started back in early to mid-June when gas prices were up over 50% YTD and a University of Michigan preliminary report showed a surge in inflation expectations.  Fed officials became increasingly worried that expectations were becoming unmoored raising fears of a 1970s-type spiral.  Since the committee was in a blackout period, they ‘leaked’ news to the WSJ that a 75-bps hike was the likely course of action at its meeting later that week.  On the 15th of June, the FOMC did in fact hike rates 75 bps in what would become the first in a run of hikes of that magnitude.

It turns out that June 13th marked the YTD peak in gas prices (they have since declined 25%), and the spike in inflation expectations from the preliminary Michigan Confidence report was revised away. In the historical data, it doesn’t even exist anymore! Even compared to the revised reading for both the 1-year and 5-10 year periods, inflation expectations are lower now than they were in June.  In other words, the two primary catalysts for the Fed put a 75 bps hike back on the table have reversed, and yet, the FOMC not only hiked rates 75 bps once but is on pace to hike rates by that amount for a fourth time today.

Who knows where interest rates should or shouldn’t be, but the inconsistency between comments made just six months ago and their actions since then is stark. Markets will likely have notable moves in either direction today based on what Powell and the committee say today, but don’t be too quick to chisel anything into stone.

What we can say for sure is that over the last six months, the move in the 3-month US Treasury yield has been extreme.  With an increase of over 325 bps, it has been the largest six-month increase in the yield since May 1981.  Going back to 1961, there have only been 147 trading days (less than 1% of all days) where the six-month rate of change was higher than it is now.  As shown in the chart below, those readings were from a brief period in 1973 and then intermittently throughout a two-year period from 1979 to 1981. 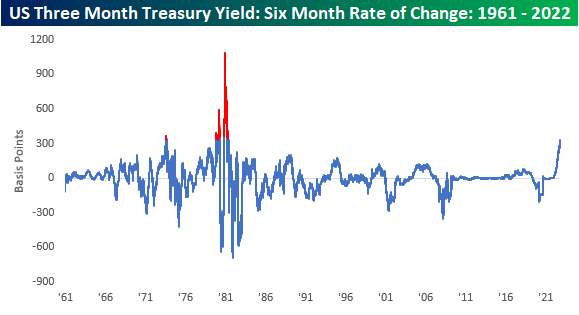